Saving a Life: A Celebration of Two First Responders 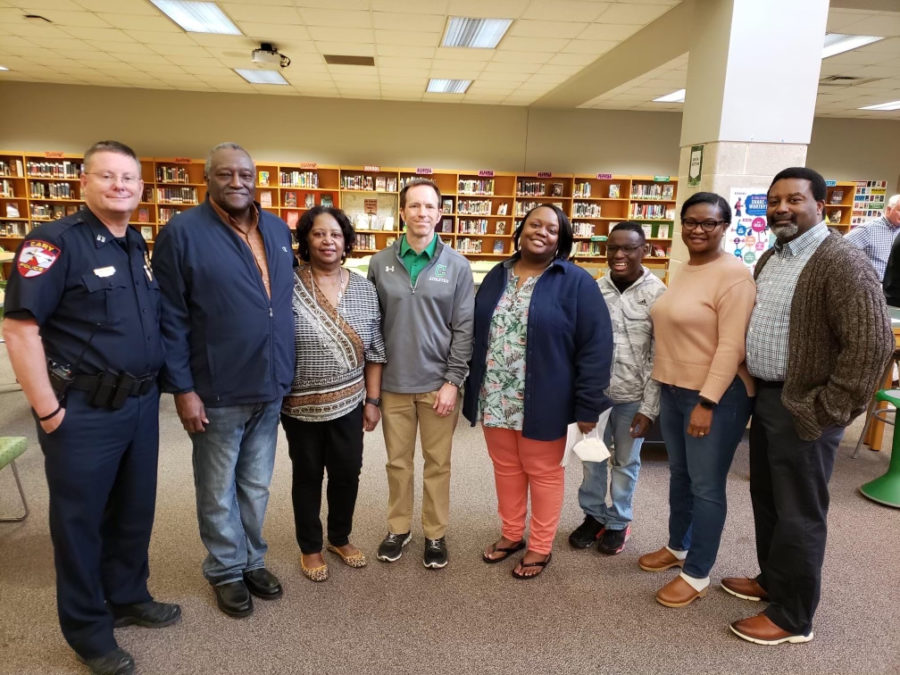 Cary Police Captain Smith, Athletic Director Hall, and Mr. Gresham, Sr. with his family at the Excellence in Service ceremony.

At a local cheer competition in February, two Cary men became heroes as they stepped in and saved a life.

On February 5th, 2022, Green Hope High School hosted a cheerleading competition for over 90 high schools in the state. Family members and friends were invited to join and watch the competition as the day progressed.

One of the audience members, Robert Gresham, Sr., joined his family in watching his granddaughter perform at the competition. However, he quickly began feeling ill and made his way toward the restroom with his son, Robert Gresham, Jr.

As the two made their way to the restroom, Robert Gresham, Sr. collapsed and had a heart attack. Gresham’s heart had completely stopped.

After minutes of CPR and a shock from the AED, Robert Gresham, Sr. regained his pulse and strength enough to get back onto his feet.

Almost two months later, Green Hope principal Dr. Camille Hedrick, Superintendent Cathy Moore and other staff members came together to host a surprise ceremony on March 30th for Captain Brian Smith and Mr. Hall. Both men each received the first-of-its-kind Award of Excellence to exemplify their actions and what it meant to both Mr. Gresham’s entire family and the Cary community as a whole.

Members of the Cary Police Department were invited to the ceremony to witness the shared moment of gratitude between the family and those who diligently work to keep people in North Carolina safe and healthy.

As a member of the Cary community, Captain Smith explained to the GH Falcon what the Award of Excellence meant to him.

“I was completely surprised by this award. Getting such an award is a little overwhelming especially when I was just doing my job. Faith provided me the opportunity to utilize my training in a way that I never dreamed,” said Captain Smith.

When asked what the highlight of the award was, he replied, “I am glad I was able to help Mr. Gresham by giving him another opportunity to live life. The award is really special, but seeing Mr. Gresham standing up and being able to give him a hug was truly the real blessing.”

Likewise, Mr. Hall shared a similar sentiment regarding the situation on February 5th.

“It is great to be recognized, but Captain Smith and I did our job. It was more rewarding to meet the victim, Mr. Gresham, and his family and know he is recovering. I hope the awareness from this situation encourages others to become CPR/AED certified,” stated Mr. Hall.

Dr. Hedrick also provided her insight on the incident. As a principal who raised her kids and continues to raise her grandkids in Cary, she noted how significant Captain Smith and Mr. Hall’s actions are to the entire town.

“Cary is very strategic and believes in a vision of serving. It’s the reason why many of us live here. You have people who work so hard all the time in this community and they aren’t paid extra to do what they do,” stated Dr. Hedrick.

This story was originally published on The Green Hope Falcon on April 5, 2022.