Freshmen Emiaj Jaime and Camila Bello Riera dance flamenco as a way to express their Hispanic culture and passions. 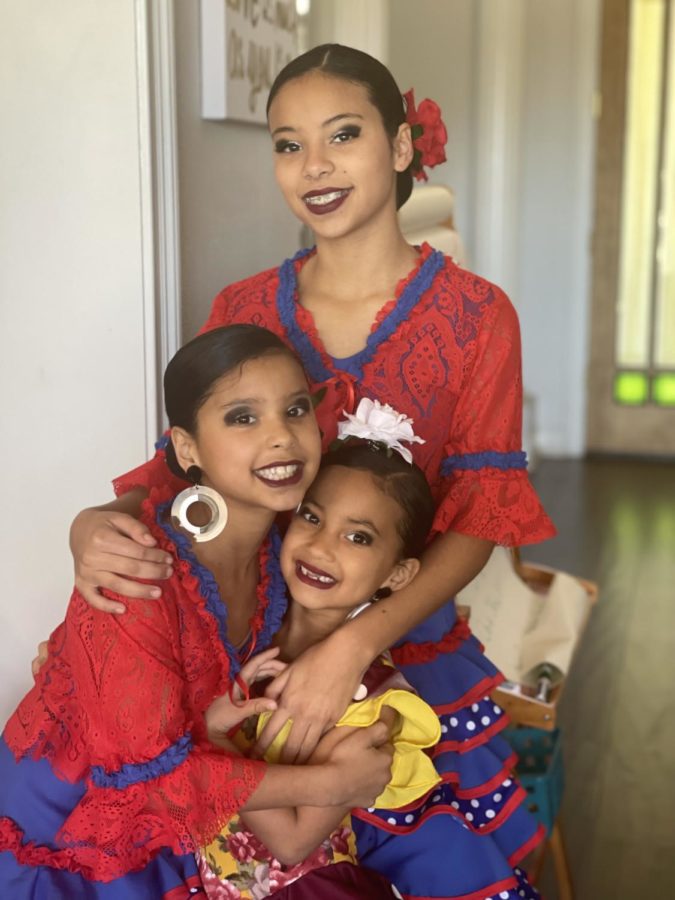 The lights dim. The crowd stills, waiting. As the music begins to play, freshman Emiaj Jaime’s foot follows, her heart beating fast. She recites the rehearsed steps in her head, and begins to dance.

Jaime, along with freshman Camila Bello Riera, are part of Flamenco Del Sol, a dance class offered in Oviedo that teaches the art of flamenco. Flamenco is a form of dance that originated in southern Spain, but is now practiced all over the world, including Puerto Rico and Venezuela, the home countries of Jaime and Bello Riera. For the both of them, their families and culture played a large role in their motivation to learn flamenco.

“My great grandma was a professional flamenco dancer, so it helps me have fun embracing my culture,” Jaime said. “Since it’s a Spanish community, it helps us to just come together.”

For Jaime, flamenco not only helps her embrace her culture, but express it to other people.

“When I do flamenco, I get to tell people about it, like if I have a show,” Jaime said. “And then I could talk about my culture and it’s easier with flamenco.”

For Bello Riera, her flamenco journey started at age 3, when her mother took her to a beginner flamenco class in Venezuela. She continued to practice flamenco for the next 11 years, until she moved to Mexico, where she took a break for three years. When she moved to Florida a year ago, she once again started dancing flamenco. Compared to her classes in Venezuela, Bello Riera prefers Flamenco Del Sol because it challenges her more.

“Here, we challenge ourselves by doing stuff that we don’t know but we’re going to learn. We didn’t do that in Venezuela because we were too young for that,” Bello Riera said.

In addition to teaching the dance itself, Flamenco Del Sol teaches students how to play flamenco instruments. Jaime learned how to play the cajon, a box-shaped drum that musicians sit on, while Bello Riera learned how to play castanets, small shells of wood that are clicked together by the fingers. Utilizing these instruments in many of their performances, Jaime and Bello Riera perform shows for family and friends, in places from Trinity Prep to the Oviedo Mall.

This past year, Bello Riera competed in Fusion Fest, a competition that aimed to celebrate the different cultures in central Florida. In total, she estimates she has participated in about 20 competitions in her life, but her first performance feels most special.

“I was very excited. But at the same time I was also scared because I didn’t know what to do,” Bello Riera said.

Flamenco is characterized not only by its powerful dance, but the clothing the dancers wear. Shipping directly from Venezuela and costing an average of $200, Bello Riera’s dresses are long with vibrant colors and ruffles. The skirt can cost an extra $180, and tacones, or flamenco heels, can cost around $150. However, she feels the cost is worth it because flamenco helps her de-stress.

“[Flamenco is] my way to take everything off my mind,” Bello Riera said. “If I’m stressed, I just go to flamenco. I don’t think about anything in my life; I just think of what I’m doing right now. I go there so I can stay on top of everything else.”

“It’s very confidence boosting because when I do the steps, [the dance] doesn’t like being shy. The steps are very strong. Whenever I’m dancing, I just feel free.”

This story was originally published on Hagerty Journalism Today on April 5, 2022.