Skyline students to embellish a communal area with murals

After five years, the mural painting class is back to paint another community-based project 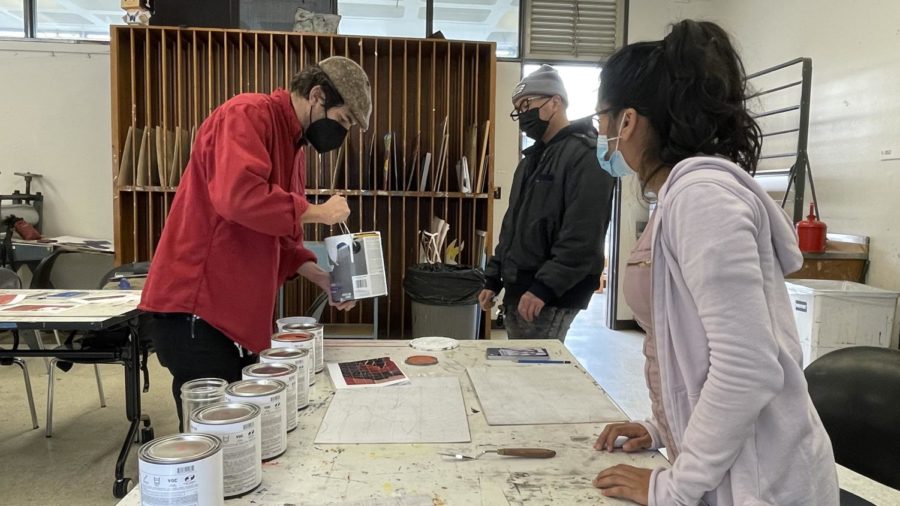 Art professor Amir Esfahani’s ART 221 class is partnering with a nearby community to complete a community-based mural project that aims to beautify and depict the culture and history of a San Mateo neighborhood this semester.

Esfahani, who teaches digital art and gallery practicum among other art courses, spearheaded the inception of the class at Skyline College through his love with graffiti art. With the help of the Center for Innovative Practices through Hip Hop Education & Research (CIPHER), his passion to teach graffiti transcended from Rock the School Bell’s workshop to a formal art course.

“As time went on, I started seeing that the aesthetic of the younger generation, the things that they like, most of it is really influenced by graffiti art,” Esfahani said. “This was a chance that I thought, ‘Well, I can introduce them to that kind of thing in a safe environment, where they won’t get in trouble.’”

For him, the Community Mural Project (CMP) is important as it allows students to go and engage with communities to create visual representation based on “what they want,” while exposing them to the craft.

In 2020, Skyline College granted the project the President’s Innovation Fund, which amounts to at least $25,000. This allows the class to be zero-textbook cost and be more accessible for students with tight budgets as materials are derived from the grant.

This is the first time the class was offered on a Saturday, which Esfahani said that he is okay with as it allowed students of different ages who are busy during the weekdays to join.

Mauli Vora works as an engineer during the weekdays, so she is most happy that she gets to be in Esfahani’s art class every Saturday.

“I have always liked colors, painting, but I never learned before,” Vora said. “So, this, I feel was a wonderful class to start.”

Juyoung Ku, who goes by Jay, is a Skyline College alum and a BFA graduate from San Jose State University, opted to audit the class.

“Whoever teachers that I felt like, left an impression or an impact in my art, I usually try to keep in touch with,” Jay said. “Amir is one of those teachers that influenced me a lot, and I look up to him, he helped me out a lot.”

In previous semesters, the CMP partnered with Daly City to paint electrical boxes around the area, as well as the Thomas Edison Elementary School Mural for their kindergarten classes. They also participated at the Michael B. Jordan (MBJAM) in 2017 and 2018 to raise awareness of and funds for Lupus LA.

Esfahani said that they are looking for a place where students can get to easily, where they can park and bring equipment, which wall has a smooth texture and where students would have more opportunity for creative freedom.

For this semester, the class is eyeing painting murals to one of the four nearby areas in San Mateo County: Sellick Park, Alta Loma Park, and Airport Alcove in South San Francisco and also the Millbrae Elementary School District.
Esfahani expects to do the production by early to mid-April once the designs and mockups are done and their pitch is approved by their partnered community.

This story was originally published on The Skyline View on February 27, 2022.