Heartstopper: a celebration of queerness, youth, and love 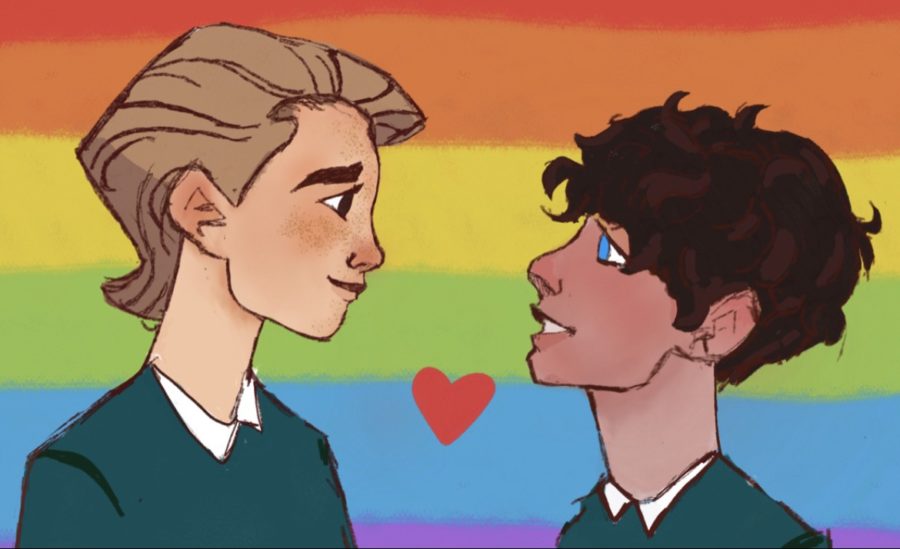 Willow Barry's depiction of the connection between Nick and Charlie in the Netflix show Heartstopper.

A few days ago, I opened Netflix to find a TV show to knit to, and was met with a pleasant surprise. At the top of my  recommended list, in the Netflix Top 10, was a title I recognized: “Heartstopper.”

“Heartstopper” is the newest big teenage romance to hit Netflix, adapted from a graphic novel series of the same name by Alice Oseman. Oseman originally published the series on Webtoon, a site where artists post and update their own comics. Currently, the Webtoon has about 10.5 million likes, and over 166 million views.

The series follows Charlie Spring, a cripplingly anxious gay teenager, who attends an all-boys school in Kent, England. The series introduces him recovering from being severely bullied the previous year after he was accidentally outed, deep in a toxic relationship, and supported by his group of friends. Rugby star Nick Nelson catches his eye, and from there the plot begins.

Fans of the show praise it for its lovable cast and amazing soundtrack, featuring queer favorites such as Chloe Moriondo, girl in red, Rex Orange County, Troye Sivan, the list goes on (a kind Spotify user has complied the whole soundtrack in a playlist titled “Heartstopper,” for those interested). The romance between Charlie and Nick is the perfect adorable relationship to bother all your friends about, and their supporting cast is just as charming.

LGBTQ+ fans will be delighted to see not only openly gay characters, but lesbian, trans, and bisexual ones as well. The show is a love letter to queerness, a celebration of the LGBTQ+ community in all of its struggles and triumphs.

Some critics of the show have derided it as being tropey and cheesy, an obvious case of “fan-service” to the queer community. Some dismiss it as another overdone, 2015-esque gay love story aimed at the fantasies of bi-curious 13-year-olds. At a glance it seems surface-level, uninteresting, already done better by more complex and serious media. Fans who have been ingesting queer media for the past decade may have already written it off as another fetishization of gay men, another poorly-written piece of teenage fluff.

I have to give these critics some credit, the show is undoubtedly fluffy. But in my opinion, these critics are missing something crucial.

The point of “Heartstopper” is that it is the love story of two dorky, confused teenagers. It isn’t meant to be a complex dissection of queerness in the modern day, it’s meant to be a place where LGBTQ+ teenagers can see themselves onscreen. It’s easy to forget, in our modern age of visibility and activism, that the queer community is still underrepresented massively in our media. Much of the “representation” we get, we get in footnotes, in backgrounds, in poorly written characters who get killed off for “plot”. That last trope is so common, it even has a name (see: Bury Your Gays).

The show is compelling not because of its commentary on society, but in its characters and themes. The show explores themes of abuse, toxic relationships, identity confusion, trauma, and more. The queer representation feels good to watch for LGBTQ+ teens because it feels accurate. From the way the kids text and joke to the infamous “am i gay” Google search, it feels true to life.

I know I felt represented when, while I was watching, one of the characters asks Nick who he’s texting. Because I am 15 years old, I said under my breath, “Your mom.” And, to my shock and amusement, a beat later, Nick turns to his friend and responds, “Your mom.”

The show also does something refreshing with the character of Elle Argent, a black trans girl with a teasing sense of humor and a knack for art. First of all, she is played by Yasmin Finney, who herself is trans, which in and of itself is amazing to see. But the refreshing part lies in her budding romance with her friend, Tao. So rarely do we get to see a trans character, much less a trans woman of color, be portrayed as desirable, as an object of affection in a romance. Trans characters are often relegated to the sidelines if they appear at all, and it hurts. I myself am trans, and the overwhelming joy I felt seeing Elle getting her pronouns respected and her identity validated was immense.

In the end, “Heartstopper” isn’t doing anything we’ve never seen before. It’s not critiquing a power structure, or tearing down an institution, it’s not reshaping our cultural mindset. That isn’t why it’s popular, and that isn’t why it was made. “Heartstopper” is a love story to obsess over and re-watch again and again, and for us queer teens, it’s a place for us to finally see ourselves, accurately and adorably.

This story was originally published on The Gillnetter on April 27, 2022.