Best of SNO • May 26, 2022 • https://bestofsno.com/57349/sports/lighting-interruption-lightning-fast-interception-flag-football-holds-onto-state-title/ 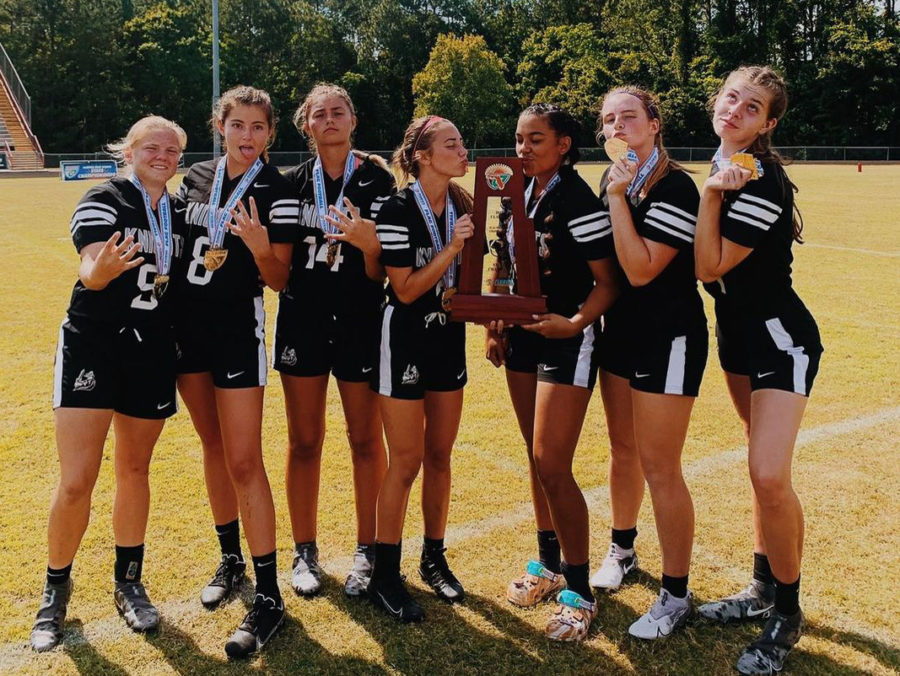 By Juno Le and Zoe Thaxton

Robinson served as the image of perfection in the high school flag football world for five consecutive years leading up to the State Championships. Their seventh (and sixth straight) state title in Class 1A only adds to their noteworthy reputation.

Back in March of this year, the team set the state record for consecutive wins to 53 in a game against Plant. They were able to make two more wins before the streak ended at 55 when they lost to Newsome High School, the 2021 Class 2A champions. Newsome lost the 2022 Class 2A Final to Davie Western 34-14.

“I think the team was getting a little bogged down by the weight of winning 55 games in a row to where we were losing the joy in victory,” Head Coach Joshua Saunders said. “It was more of a relief to win games instead of be happy, so I bet the loss freed us of that. We finally got back that freedom and happiness when playing.”

Still, RHS has set a standard for the growing popularity of flag football across the state, ending this year at the 2022 FHSAA Flag Football State Championships with an overall season record of 22-1 wins to losses. The team left for Jacksonville on Friday, May 13, where they’d play the next two regional games at Mandarin High School.

The Knights secured their spot in the State Finals on Saturday after playing Choctawhatchee “Choctaw” High School, following Friday’s win in the State Semifinal against Jensen Beach 45-13.

With all eyes looking at the defending state champions, the Knights kept ahead for a good amount of the first half. Three touchdowns were scored by Jaylen Stasio (’22) and Katejion Robinson (’23) between the second and third quarter, who put the Knights in a comfortable lead.

“The most interesting thing about playing [Choctaw] was trying to match their energy. We’ve been doing this for many years but making it to Finals was a new thing for their team,” Robinson said.

RHS has had a pattern for keeping their opponents from scoring a single point in the entire time and would typically hold a heavy lead over whoever they played against them. Back in March, the Knights won four straight ‘blowout’ games against Riverview (25-0), Wharton (33-0), Plant (35-0) and Sickles (52-0). They did it again in April for another four straight games against Strawberry Crest (55-0), Hillsborough (18-0), Seminole Ridge (6-0) and Plant City (37-0). That was not the case with this final game.

However, some rain and drama sprinkled in toward the end of the third quarter, which ended 18-6, Knights still leading. This momentum the Knights had built up was thrown off a bit when they had to retreat to the locker rooms for a lightning delay with the girls anticipating how they would wrap up the game in the final quarter.

Lightning cleared, and RHS was approached with a low marginal difference to compete with during the last 12 minutes of the championships.

“Doing the math, we figured that we could run out the clock, so we weren’t particularly worried about maintaining the lead in the game. We just needed to make sure that we executed plays,” Saunders added.

With roughly 56 seconds remaining, the Knights were leading by a mere six points. Had Choctaw scored one more touchdown in that final minute, Robinson would’ve lost the State title after six consecutive years.

And they almost did.

The Knights took a safety, handing the ball back to Choctaw at their own 30-yard line. Another 50-yards would’ve given the latter a touchdown, taking away Robinson’s state title. Alas, Choctaw’s quarterback and receiver were read by a certain sophomore Robinson linebacker.

One final interception was made by Manasvi Vijayaraghavan (’24), sweeping away any chance of Choctaw’s win.

“Right after the ball was snapped I looked to my left and was aware that a slant was being run behind me, that is when I knew I should get some depth because if anything was thrown underneath it wouldn’t be as big of a threat since we have every player coming down to get the flag,” Vijayaraghavan said.

Vijayaraghavan credited the interception to her preparation from when the team’s defense coach, Greg Green, pulled the starting defense aside to discuss their game plan to look out for, sparking her reflection of her experience playing this season.

“Once I got depth and noticed the ball was thrown to my area I knew that I had to make a play on the ball to end the drive,” she added.

Another State Championship Final was finished. The game ended 18-14 with the Knights victorious.

Now the girls are back greeted with several congratulations from classmates and teachers. With the same number of championship rings, the Class 1A State title gets to stay with RHS for another year.

“Ask any flag kid… they have such a good team bond and family to where they hang out outside of practices. It makes it way easier to play for your friends than to play with random strangers,” said Saunders, one of Robinson’s biggest promoters of joining the flag football team.

This story was originally published on RHS Today on May 18, 2022.