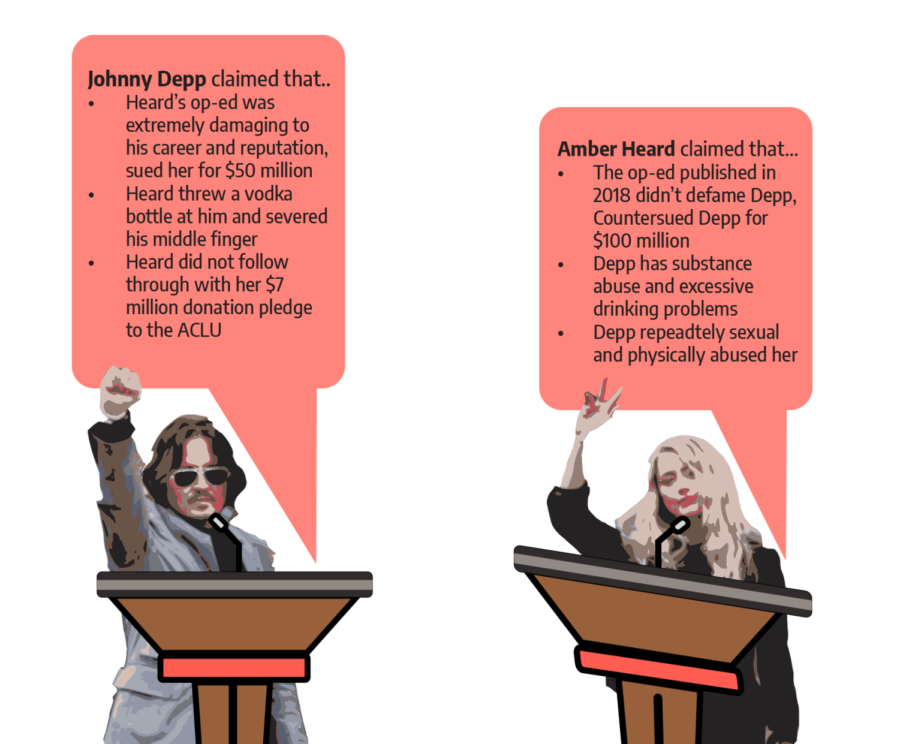 Beginning on April 11, the defamation trial between divorced actors Depp and Heard has been playing out.

Note: This story contains references to content that may be triggering for those who have experienced trauma or are sensitive to topics concerning domestic violence.

“Tell the world, Johnny — Tell them Johnny Depp: I, Johnny Depp, a man, I’m a victim too of domestic violence, and see how many people believe or side with you,” actress Amber Heard said on a voice recording played at the district court in Fairfax, Virginia.

Her taunting rang loud and clear through the courtroom. Beginning on April 11, the defamation trial between divorced actors Depp and Heard has been playing out, with an extended end date on May 27 due to a new influx of evidence. Its process has brought to light the severity of the domestic abuse that Depp suffered at the hands of Heard and serves as an example of how male abuse victims are often ridiculed or ignored, perpetrating dangerous societal norms about how progressive ideas can be selectively upheld for those of a different sex.

“I lost nothing less than everything,” Depp said. “No matter the outcome of this trial, I will carry this for the rest of my days. I will live with that for the rest of my life because of the allegations and because it was such a high profile case.”

Depp sued Heard in 2019 over her 2018 Washington Post op-ed, titled “I spoke up against sexual violence — and faced our culture’s wrath. That has to change,” for $50 million. While Depp is not mentioned by name, it can be inferred that Heard was referring to him when she wrote about domestic abuse allegations, given their recent divorce. The couple split in 2016 after Heard successfully obtained a $7 million temporary restraining order against Depp, claiming he abused her while under the influence of alcohol and drugs, which he denied. In 2018, Depp also sued and lost a case against The Sun, a British tabloid newspaper, for alleged libel over an article with the headline: “Gone Potty: How can JK Rowling be ‘genuinely happy’ casting wife beater Johnny Depp in the new Fantastic Beasts film?”

And indeed, following Depp’s loss in the case against The Sun, film company Warner Bros recast Depp for his role as leading villain Gellert Grindelwald for the third film in the Fantastic Beasts and Where to Find Them franchise. Immediately following Heard’s op-ed, Disney also dropped Depp from the proposed sixth Pirates of the Caribbean film, in which he played the iconic main character, Captain Jack Sparrow. Despite Depp’s recent claims about his experiences with abuse, Heard has not been dropped from her role as Mera in the upcoming film, Aquaman 2. While it is reasonable for companies to want to avoid being portrayed in a negative light for casting controversial individuals, as allegations of abuse from both sides pile up, it is unfair that Heard has retained her acting job as the court case progresses. The fact that Heard was not also immediately removed from her films proves that the public immediately took the side of the original alleged victim and didn’t give Depp’s side of the story proper consideration.

“I don’t blame companies for dropping Johnny Depp because it’s understandable to drop someone who’s very controversial — that doesn’t mean the companies like or hate him, but they just don’t support anything that comes with the allegations,” junior Anna Milman said. “But I do believe that there should have been repercussions for Amber Heard as well, especially as the case has progressed. In the case that Johnny Depp wins, I hope that he will be able to regain some of the roles that he lost.”

According to the National Coalition Against Domestic Violence, 1 in 4 women and 1 in 9 men in the U.S. experience severe intimate partner physical or sexual violence and/or stalking. Although women are statistically more commonly abused than men, this statistic is not a valid excuse to immediately take a woman’s side when there are claims of abuse from both individuals. Depp v. Heard has made it clear that not all domestic abuse victims are female, and that those who are not should be treated with the same amount of respect and validity. In the case that there are signs of domestic abuse from both parties, people should not jump to conclusions about who the perpetrator is and instead let the evidence and due process play out.

“In the court of law, you are innocent until proven guilty,” junior Cougar Karson said. “Especially from a judge’s point of view, someone shouldn’t take a side until they gather evidence, not necessarily circumstantial evidence, but solid evidence that actually can prove something. Right now, Johnny Depp is getting played the guilty until proven innocent card a little bit.”

Society frequently preaches speaking out about abuse and believing victims first, but when both parties claim to be a victim, a course of action can become unclear. Historically, victims of abuse and assault have been met with disbelief when they share their stories, and this incredulity can add another layer of trauma onto what victims have already experienced. The mindset of believing the victim first is a way to ensure that skepticism doesn’t become victim blaming, but when it is unclear who the victim is, both sides should be provided with support and given the chance to speak out.

“There’s a difference between believing and supporting the victim and finding revenge against the abuser,” Milman said. “I do think that immediate support is very important, but it’s not necessary to try to retaliate against the accused instantly without looking into it. Even if the victim ends up not being the victim, I think it’s still necessary to support them no matter what. I think Amber Heard still deserves to get help for what she experienced.”

However, when this support mindset is twisted for self-gain or to taint others’ reputations, the credibility of victims plunge. Heard’s contradictory statements are damaging to the believability of other women who genuinely suffer because of domestic violence. Victims may feel trapped, wanting to speak up but thinking that no one will believe them.

“Anyone who says they are a victim of domestic abuse should be believed, which is why this is so upsetting, because if Amber Heard is truly lying, it gives people who don’t believe in domestic violence victims the chance to say, ‘Look at this huge case — not every victims’ voice is valid,’” junior Hallie Zhu said.

The publicity of this trial has put the severity of domestic abuse on full blast across the world. Millions of people are watching the court case play out, whether through the court broadcast or through the social media storm that has brewed from fans’ reactions. But unlike the majority of the nation, Depp and Heard are multi-millionaires and famous actors who have the capital to pay for expensive lawsuits. While this will foul their public images, both will still be able to live comfortably regardless of the outcome of the trial.

Domestic violence affects an estimated 10 million people every year in the U.S., according to the National Library of Medicine. That means that 10 million situations like Depp and Heard take place every year, if not more. Unfortunately, a vast majority of these individuals cannot afford to leave their partners due to financial dependence. Low-income victims often cannot afford to file a lawsuit or hire a lawyer. Poverty traps victims in exacerbated abuse cases and muffles their pleas for justice, a side to the issue that is not present in Depp v. Heard.

“Unfortunately, this is just one case — there are millions of people who suffer from domestic abuse and their situations are all different,” Karson said. “If people learn anything, it’s that both sides can be domestic abusers, man or woman, and everyone deserves a fair trial.”
Despite the fact that this court case has raised awareness about domestic abuse, impoverished victims often don’t get a chance at justice like Depp does. When a victim of any economic class speaks up, onlookers can minimize additional harm by refraining from making conclusions about abuse situations based on gender norms or statistics and providing support and resources. Only then can more domestic abuse victims, both men and women, tell the world as Depp did about their stories and struggles.

If students find themselves in danger of domestic abuse, they should reach out for help immediately to resources such as the National Domestic Violence Hotline (1-800-799-SAFE(7233)), which is available at all times and in 200 different languages. If a student suspects that a friend is in danger of domestic abuse or is suffering from domestic abuse, they can offer their support by making sure they know they’re not alone and are able to seek help if they need it. If it becomes necessary, they may also need to call protection services themself in place of their friend. Other resources include Dr. Brittany Stevens, the school psychologist, and the Teen Therapy Center of Silicon Valley.

This story was originally published on The Epic on May 26, 2022.