Artificial intelligence begs the question of what is art. 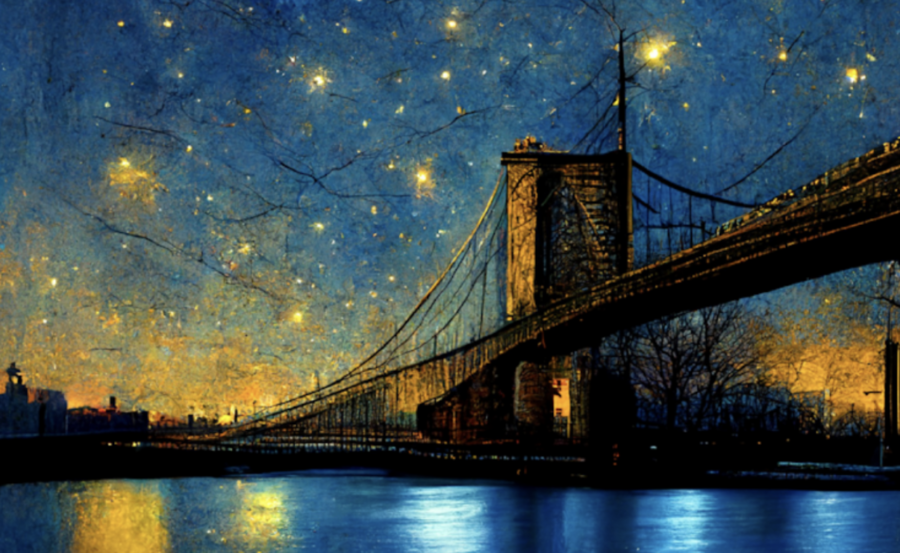 I still don’t know whether I felt terror or awe at that moment.

While perusing the internet, I found myself on the website of an AI – artificial intelligence – art generator. The program asked for a prompt and returned an AI-generated piece of art accordingly. I typed in something simple for my first prompt: my favorite basketball team – the Knicks. Within 45 seconds the program displayed a beautiful painting of five Knicks players on a basketball court. I got more specific: Van Gogh’s Starry Night but with the Brooklyn Bridge, a Chinese dragon from the view of a spaceship window, Paris submerged under water like Atlantis. Time and time again the program created pictures that left me at a loss for words. The art wasn’t just accurate to my prompt, it was beautiful and original. It looked human-made.

This experience launched me into some sort of existential crisis. Dozens of questions rushed into my head. How can AI make such beautiful and emotion-inducing art? What does this mean for me, an amateur cartoonist, who can barely match the AI’s art with days of work, let alone do so in 45 seconds? If AI can make art then what separates us humans from machines? Is the robot apocalypse approaching?

First, we must understand how AI art generators work. Most AI art generators use generative adversarial networks’ algorithms. Invented by Ian Goodfellow in 2014, generative adversarial networks, also known as GANs, use two competing neural networks to create their art. In simple terms, one half, called the generator, makes new images and the other, called the discriminator, judges them. The two parts work together to create a desired image based on a human input prompt.

Knowing this, AI art begs the question of what is art. This is a complicated question, one meditated on by many great minds throughout history. Some, such as Plato and Aristotle, viewed art as an imitation of nature that captures the essence of ideas and forms. Others, such as Leonardo Da Vinci, Leo Tolstoy, and the 19th-century Romanticists, argued that art is an expression of emotions and a medium of ideas and feelings. Others even argue that everything can be considered art. Still, most define art as an expression and reflection of humanity.

With this in mind, people can argue that calling AI an artist is blasphemous. AI learns from tens of thousands of human-made art and reproduces new ones. It lacks consciousness and understanding of what it makes and is just trained to recognize symbols that are meaningful to humans. Such art isn’t representative of any AI experience, but rather a mimic of the human experience.

But does that really matter? As much as it scares me to say, the AI art moved me. One could argue that how a piece of artwork is perceived by others is more important than its creator’s intentions, or lack thereof. On top of that, some AI art is indistinguishable from human-made art, making the intentions of the artist seem unimportant.

Additionally, as Pablo Picasso said, “Good artists borrow, great artists steal.”  AI is able to do exactly that. AI can learn from all the great human masterpieces and create new ones that, arguably, reflect the human experience accurately.

Call it art or not, AI art generators have proven to be profitable. In 2018, one portrait made by AI sold for $432,500. Additionally, subscribers to AI art services pay as little as $10 a month to use the generators to make art for themselves.  The artwork they “create” is legally considered their own and can be used for creating company logos, generating album and book covers, or for sheer curiosity.

Does AI art signal a future ruled by robots? Probably not. AI art, however, will surely have an effect on us. It will affect artists by making their art either more obsolete or valuable, and it will affect those who don’t create art by giving them the ability to do so in seconds with little to no work involved. In a world where attention spans are decreasing and instant gratification is prominent, AI art might hinder human creation and devalue and disincentivize human-made art. It could, however, help people find inspiration for their own creations and generate images they envision without having to wait and pay someone else to do so. My hope is AI becomes a useful resource and not an impediment to imagination.

This story was originally published on The Boiling Point on September 4, 2022.