An online culture of anti-intellectualism brings with it an onset of ignorance in both culture and science. 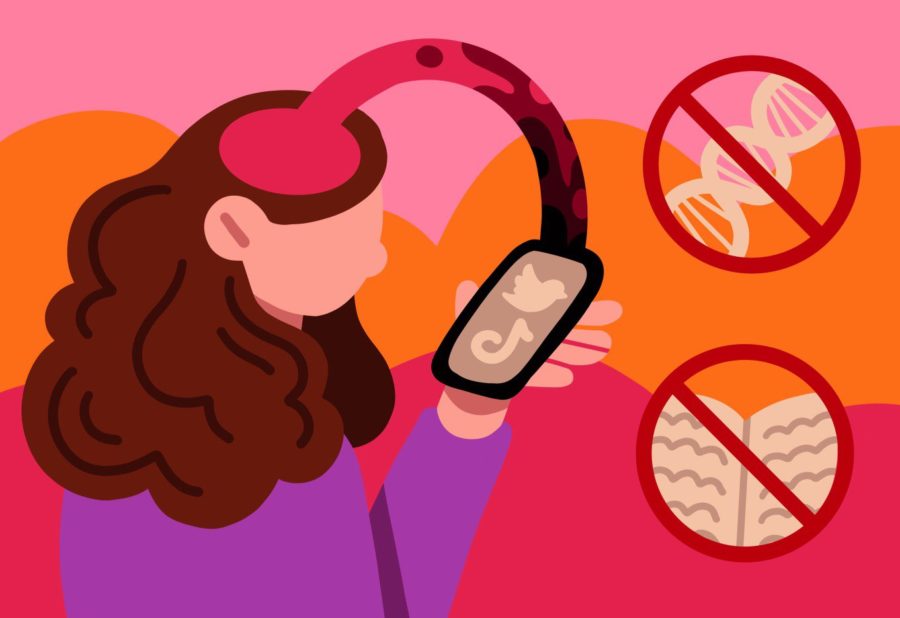 Campaigns against science and/or foreign art have a long and frankly terrifying history.

In 2020, when COVID-19 was first announced, a wave of pseudoscience rushed through the internet. From health gurus recommending plants like garlic, ginger, hot pepper, and lemon as healing medicines to politicians with little to no experience in medicine giving prescriptions at a time in which no vaccine was actually available, misinformation seemed to be everywhere. A growing distrust of scientists, specifically in the Centers for Disease Control and Prevention (CDC), only made the inaccuracies spread further.

Unfortunately, this distrust is not unique to 2020, or even to COVID-19. Anti-intellectualism, or a generalized suspicion and mistrust of intellectuals and experts in both the humanities and sciences, has been present and active throughout history. Although anti-intellectualism has a multitude of sources, from fundamentalist religion to the devaluation of education in favor of practical knowledge and common sense to suspicions of social elites, the internet has become a tool for spreading this rhetoric.

However, while many associate the rise of COVID-related distrust of scientists with conservatism—an assumption that is not necessarily incorrect—the rise of anti-intellectualism, in a broader sense, is much more bipartisan than it seems.

As Merkley  and Loewen stated in their Nature research paper, “The evidence we provide here consistently shows that anti-intellectualism matters in its own right and not simply as an outgrowth of ideological conservatism.”

Anti-intellectualism doesn’t just pose a threat to science, but to art as well. Throughout the internet—but more specifically apps with a limited video length or word count like TikTok and Twitter—have seen a rise in anti-intellectualism when it comes to the arts, particularly in novels and films.

Predominantly American TikTok creators have begun to make caricatures of “film bros,” a term that once insinuated an arrogant person who claims to be a film nerd but actually has only a surface level understanding of film. Creators on the app have since expanded this definition to include anyone who enjoys art cinema. In doing so, they criticize the cinema itself, particularly targeting black-and-white movies, European films, and movies with dark or political themes.

The value of these films, as well as foreign literature like Russian author Fyodor Dostoyevsky’s Crime and Punishment, are negligible to a large portion of American TikTok and Twitter users. On an individual scale, a tendency towards Disney films and young adult books and away from classic film and literature is harmless, less a grand statement pertaining to society and more of a matter of personal taste. However, on a larger scale, a popularization of dislike towards predominantly foreign media, as well as a refusal to watch films with political themes, becomes much more insidious.

Anti-intellectualism is dangerous. It shows the danger in how distrust in scientific communities can lead to an increased spread of diseases like COVID-19 or become a factor in climate change misinformation. It shows its danger in how a narrowing of the arts to purely modern American literature or films can bring about a lack of foreign perspective, creating a culture that is just that—lacking. And it shows its danger in how a rise in anti-intellectualism often comes with a rise in fascism.

This growing refusal to engage in challenging media, especially media from foreign countries and perspectives, as well as the distrust in science that we saw predominantly in 2020 and 2021, has a disturbing history. Accounts of book-burnings are ubiquitous throughout literature depicting Nazi Germany, the majority of them being books that were subversive or ideologically opposed to Nazism.

Many of them came from outside Germany’s borders, including “bourgeois” writers like the Austrian playwright Arthur Schnitzler and “corrupting foreign influences,” among them American author Ernest Hemingway. These books were declared “un-German”.

In fostering distrust of foreign science and writings, the Nazi party was able to take control of both facts and art, crafting both into propaganda. An article published by Nature on February 21, 1942 noted the biological fallacies found in Nazi rhetoric. The article states, “Science in Nazi Germany is valued solely in its relation to the needs of war.”

This is not to say that anti-intellectualism causes a rise in fascism, but the connection between the two is still alarming. While the anti-intellectualism found on the internet is not a product of the government, a growth in American individuals refusing to watch or read media beyond the borders of the United States is disconcerting.

Intellectualism in both art and science can seem pretentious, reserved only for the “elite.” Often, it doesn’t seem like it’s worth it to engage with, as if the authors, directors, and scientists that have risen to prominence deliberately complicated their art and research. But academia and higher level art groups are commonly elitist. Science and art have certainly had their fair share of missteps. The CDC has undeniably contributed to public health disasters, and many portrayals of marginalized groups in the most lauded pieces of art are actively harmful.

These are problems in intellectual spaces; it can not be denied. I do not intend to advocate for trusting experts blindly. Of course, one must approach art and science with a critical eye. But that doesn’t mean that there isn’t value in higher arts and sciences, that works that are flawed should not be read or watched. A refusal to engage in intellectual media and science won’t fix the problems inherent in the “great” works of art or academia; it will only breed more misinformation and ignorance.

Editors’ note: All opinions expressed on The Uproar are a reflection solely of the beliefs of the bylined author and not the journalism program at NASH.  We continue to welcome school-appropriate comments and guest articles.

This story was originally published on The Uproar on September 14, 2022.