In a pink out to honor Coach Gait and to raise awareness for breast cancer, the team will take on Lightridge tonight at 5:45. 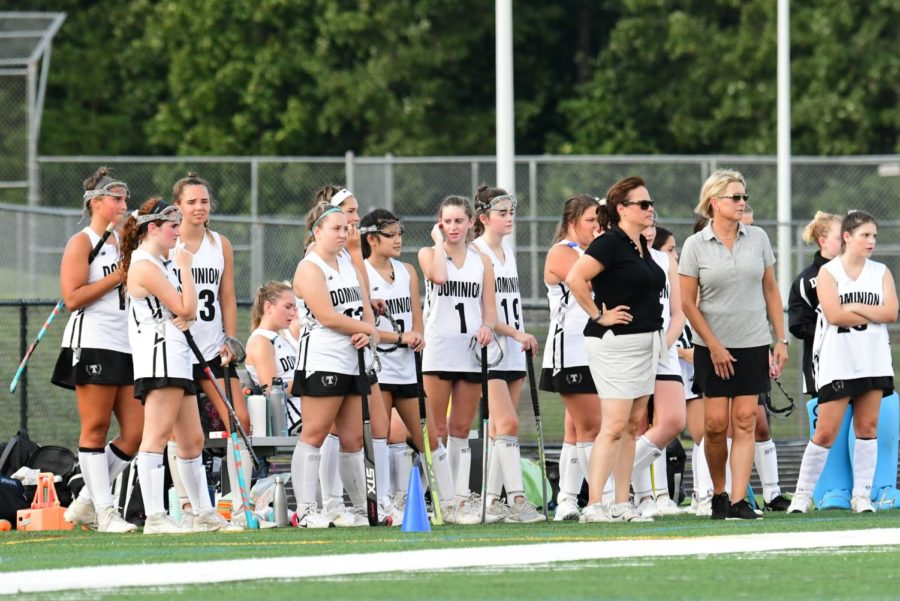 Courtesy of the yearbook staff

Coach Gait, in the grey polo, will be honored at tonight's game.

Tonight in Titan Territory will be memorable, as the field hockey team will be honoring Coach Gaitten, who coached from 2019 to Spring 2021 before losing her battle to breast cancer. Having a major impact on the program, still seen today, the team will play in her honor at 5:45 against Lightridge.

The team will be decked out in pink attire and are encouraging students to come out in support. “You’ll see that the team will be wearing pink socks, our warm up jerseys, which [are] designed with the pink ribbon on the side, and the coaches will be wearing pink and orange shorts to reflect her time at Syracuse and for cancer awareness. We will also have an introductory speech honoring her,” said Coach Bob Stravinski (his daughter Callie Stravinski is a member of DHS Press and is on the Field Hockey team).

The game will be especially emotional for her daughter. “It’s heartwarming to see that even two years after she stopped coaching, that people are still willing to come out and to honor her,” said Coach Gait’s daughter and four year field hockey member Maggie Chang.

“Students should attend this game because it’s really special to all the players, especially since next month is breast cancer awareness month. It’s [also] one of our only home games for the whole season,” sophomore Riley Albanese said.

The memorial game is particularly important to the seniors, as they had been coached by Coach Gait for two years. “It definitely makes me sad every time I think about it, but she is the reason I am still playing field hockey. I definitely wouldn’t be here today without her. She’s pushed me and motivated me,” said senior Gabrielle Stravinski, Coach Stravinki’s daughter and Callie’s sister.

“Freshman year, there was a big class of seniors, and that was the first year she was coaching. I remember hearing one of them say that they had a previous coach and it made them dread playing after old school, since they didn’t want to see the coach. But when my mom started coaching, they were excited every day to come to practice and they were happy to do the games. They really just wanted to come and enjoy the community and be coached by her and I always thought that was really heartwarming and just touching because it’s nice to see people you care about making that kind of impact,” Chang said.

“The biggest thing it’s a happy night. Bittersweet and sad, but it’s a way to honor the seniors, certainly to honor Maggie, but most importantly, Coach Gaitten and what she helped build here at Dominion. I’m hoping that everyone who attends keeps her and her family in their thoughts, and we come out with a win to honor her,” Coach Stravinski said.

“I think it’s a really good idea for multiple reasons, even pink out in general, for sports, even if it’s not relevant to the team because it shows good awareness, especially for an issue that’s so prevalent for women everywhere,” Chang said.

This story was originally published on DHS Press on September 15, 2022.