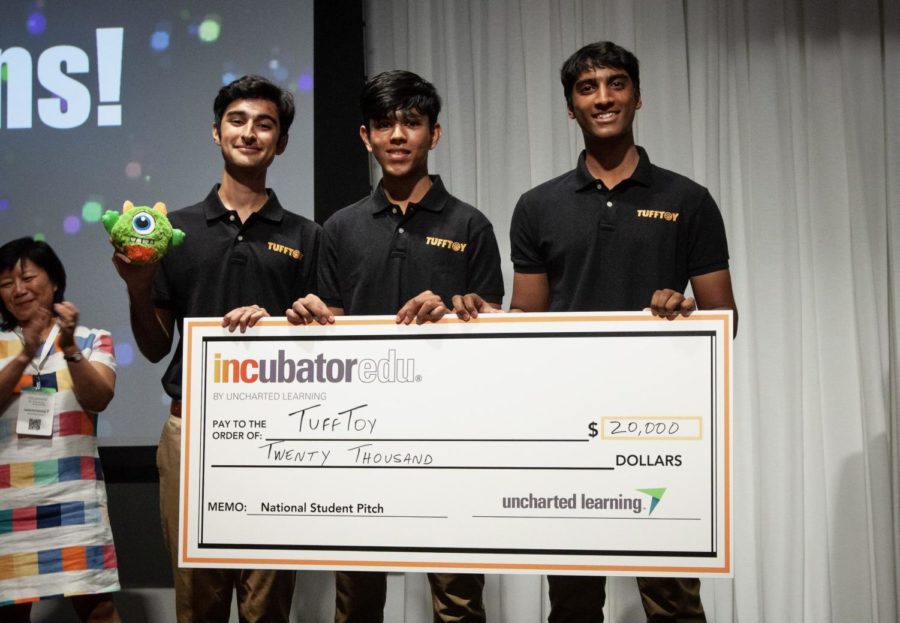 Seniors Zubin Khera, Arin Jain and Rohan Gorti hold up a check of 0,000 written to TuffToy after winning the National Pitch Competition in Chicago in July. The three founded TuffToy in their junior year to sell customizable and durable dog toys.

By Desiree Luo and Ananya Sriram

How do high school students start their own businesses? This question echoes inside the minds of many budding teenage entrepreneurs with ambitious dreams and diligent spirits. Age, limited resources and other restrictions pose challenges to high schoolers. Despite these obstacles, seniors Rohan Gorti, Arin Jain and Zubin Khera did just that in their junior year.

Behind Manzanita Hall lies an unassuming building. Known as the Innovation Center, it stays true to its name. Initially serving as the birthplace of students’ self-curated solutions to common problems, the Innovation Center nurtures ideas, providing the potential to make them reality. Among the many ideas students formed in the Innovation Center last fall was TuffToy, the name of Rohan, Arin and Zubin’s solution to expensive yet easily damaged dog toys.

As the three co-founders enter their senior year, Tufftoy, now a profitable business that sells customizable, durable, and “paw-some” dog toys, has not only broken through the saturated dog toy market but has also found competitive success by winning first prize and a $20,000 grant at the 2022 INCubatoredu National Pitch Competition in July in Chicago.

Like many of their peers in the Honors Entrepreneurship: Startup Incubator I course, Rohan, Arin and Zubin began by identifying a problem and brainstorming solutions to solve it. Upper school business and entrepreneurship teacher Michael Acheatel, who teaches the course, observed a common goal amongst the group early on.

“The only thing they had in common coming into class was that they all had this passion to create a company,” Acheatel said. “They all have different backgrounds, but they all were super dedicated and willing to do what it took.”

As the year progressed, the three realized that the process of turning an idea into a business involved unexpected challenges, requiring them to perform unfamiliar tasks and consider logistics previously unbeknownst to them.

“We had a lot of crazy experiences, from learning how to do marketing analysis, learning what works and doesn’t work, to learning how the legal side of running a business works, how to file for a partnership agreement, how to file and open a bank account, and all of these important life skills,” Zubin said. “The entrepreneurship course teaches you so much more than just opening a business. It teaches you a lot of life skills that you’ll need to understand later on in life.”

The team’s concept of a dog toy paled initially to their peers’ ideas, yet Acheatel reminded them that a simpler product did not necessarily mean a lower chance of success.

“If you have a really sophisticated product, you’re probably going to be in product development for years,” Acheatel said. “[Rohan, Arin and Zubin] were kind of written off by a lot of their peers, like, ‘Oh, you’re just doing a pet toy. That’s not innovative; that’s not ‘Silicon Valley.’’ But I told them that I was excited because they were going to reach prototyping and commercialization much more quickly, and they were able to stick with what they knew was going to work.”

Starting up a business required the three to establish connections with professionals in the dog toy industry. Although the prospect of cold calling others intimidated them at first, simply making the call and receiving a response motivated them to repeat that success.

“When we started our journey with TuffToy, we were very shy and scared to reach out to new people and to make connections and to build our network,” Arin said.” The first big confidence booster was when we made a call to a manufacturer, and they actually responded and were happy to help prototype our toy. After making one call, we realized that if we do this ten, fifteen times, we’d have a lot of options on the table, and we’d be able to grow.”

For the team, one of the motivating factors was having an attainable goal to drive them to develop their products, marketing strategies and mission. Small moments of success, from finding a manufacturer to identifying new marketing techniques and gaining more contacts, urged them to enter the pitch competition.

Spurred by hopes of establishing national credibility along with the incentive of a $20,000 prize, the three entered Willis Tower, an office skyscraper home to more than 100 companies in downtown Chicago, ready to pitch the product that they had meticulously worked on for the past year. Yet, standing amongst numerous other student entrepreneurs, whose products were decorated with accolades, Rohan, Arin and Zubin recognized that this competition posed a different type of challenge, one that required them to distinguish themselves in a sea of ambition.

“We were competing against apps and technology platforms, and what are we? Well, we’re a dog toy,” Arin said. “There was a sense of doubt amongst our competitors, amongst the audience and amongst the judges. When you look at it from a surface level, we didn’t seem as competitive.”

Nonetheless, their presentation conveyed months of preparation, distinguishing them from complex, technology-centered competitors. Just as Acheatel had predicted months before, TuffToy’s sales provided it with an edge over software businesses still in the development phase.

“We were the last team to present, and we were very energetic. We had a lot of puns in our presentation — credit to Zubin there,” Rohan said. “Once we finished presenting, everyone started to give us respect because we validated that it’s not just a dog toy. It’s an innovative dog toy. We had a real problem [and] a real solution.”

TuffToy’s brand image could not have been better represented by anything other than the trio’s  “playful” presentation centered around organized and “incredible storytelling” as noted by Michael Miles, one of the five competition judges and co-founder of Uncharted Learning, the institution that annually hosts the National Pitch Competition. Miles also echoed Acheatel’s comments about the product’s simplicity.

Zubin recalls walking off of the stage after their pitch to be greeted with high-fives and praise from Miles, fellow competitors and their sponsor, a coordinator at the event, with some demanding to buy dog toys immediately after the competition.

The moment TuffToy was announced as the winner, Rohan remembers, was “euphoric.”

“I don’t think any of us were really processing it until the check was physically in our hands,” Zubin said. “It was an awesome feeling [to walk] around downtown Chicago with this giant check in our hands.”

Rohan, Arin and Zubin do not plan to stop here. In fact, they plan to implement the judges’ feedback from the pitch competition as soon as possible. They also hope to soon start selling their products in stores, the first step in Tufftoy’s entrance to the dog toy industry.

“They’re taking Honors Entrepreneurship II next year, and I’m super excited to work with them on spending this $20,000, putting together their marketing campaigns and getting their next round of inventory for their next product line,” Acheatel said. “Keep an eye out for TuffToy and a lot of big news to come from them in the 2022 to 2023 school year.”

A year of navigating the business world has provided the three with the fundamental knowledge to carry them into TuffToy’s next chapter. Zubin cautions students against starting a business on a large scale and advises them to instead focus on their limits as high schoolers.

“[Have] an idea that’s feasible,” Zubin said. “For instance, having a dog toy company is a lot easier to do for high schoolers who are just starting out than starting a shoe marketplace online. That’s where this disconnect comes in. You [need to] not only have a scalable business, which both are, but also a business that is easy to understand, not just for you, but for someone you’re explaining it to.”

Although the recognition and glamor of founding a business appeals to young entrepreneurs, this success is built upon trial and error. As for Rohan, Arin and Zubin, bringing their plans into fruition entailed forging their own path and stumbling along the way.

So, how do high school students start their own businesses? How do they turn an idea written on a whiteboard into a nationally acclaimed brand? The founders of TuffToy believe that there is no specific procedure. Instead, creating a business means setting a goal and resolving to reach it with the help of some life lessons and puns along the way.

“Don’t be afraid of failing,” Rohan said. “We didn’t know where we were going with a dog toy for a while. We failed at everything, and eventually [everything] came together. Even if TuffToy didn’t work, we would have all come out of this with a lot more knowledge than we would have if we didn’t do it. Experience some failure, and something will click eventually.”

This story was originally published on Harker Aquila on August 30, 2022.