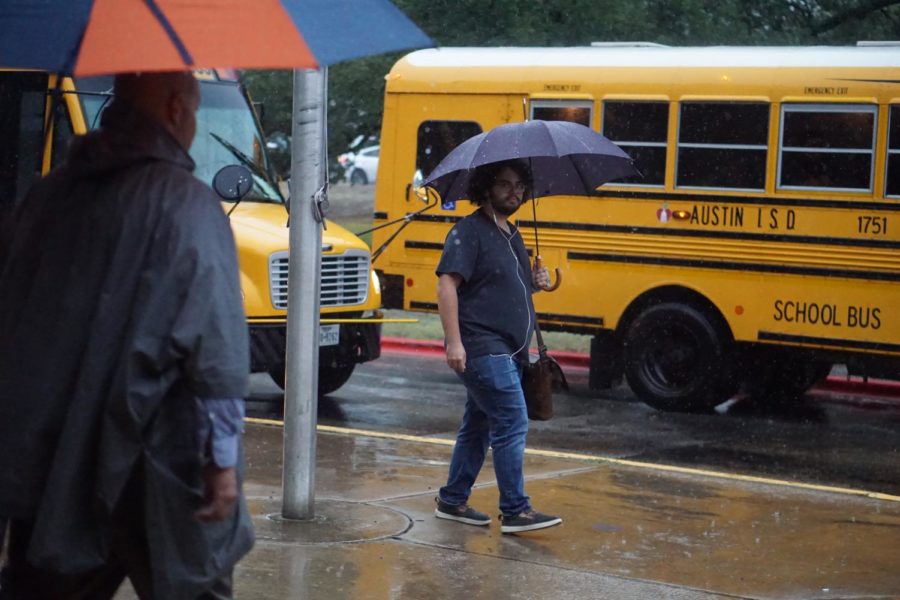 UNDER THE UMBRELLA: Junior Wilson Corbitt heads toward his dad’s car near the portables during Monday afternoon’s rainstorm. Corbitt faired better than some students, having the forethought to bring an umbrella to school. “In that moment I thought ‘I bet you all thought I was crazy for bringing an umbrella on a sunny day,’” Corbitt said. His intuition proved right, but Corbitt connects this occurrence to a larger issue facing Austin and the planet. “Every year the weather in Texas gets more and more unpredictable and severe due to climate change,” Corbitt said. “And that’s coming off the back of one of the hottest summers on record where today was the first day since May under 90 degrees, which is making it progressively difficult to tell what might happen.” Reporting by Alice Scott.

After more than 50 days without rain in the metro Austin area, heavy rain coincided with student dismissal for the third consecutive school day on Monday. The torrential rain was more severe than it was on Thursday and Friday.

With Travis County under a flash flood warning, the administration held students in their fourth-period classrooms for an extra eight minutes until the rains let up. Austin ISD issued a statement via Twitter at 4:32 p.m. that district schools were going to delay bus transportation until the rains abated but allow parents to pick up their children.

Austin ISD Families:
Because of flash flooding warnings, out of an abundance of caution we are delaying bus pick up for high schools until the storm passes. Parents are free to pick up their children from the schools.

In accordance with that policy, bus-riding students waited in the cafeteria at Mac while students waiting for parents to pick them up stood in front of the school. The busses arrived soon after one at a time. The last bus pulled away from Sunshine Drive at 5:25 p.m.

There were reports on campus of widespread ceiling leaks in classrooms throughout the school.

Fearing the persistent ceiling leak that has been chronic to her classroom for seven years, science teacher Sarah Noack took down the posters that usually hang on her windows. In the past, leaks have caused water to destroy her lab supplies, her lab safety bulletin board and student-created posters that hang in her room.

Graphic design teacher Tim Carroll was not so lucky. Leaks from the rain landed heavily on seven iMac computers in his classroom. As a result, he moved all 30 computers in his lab to a center aisle table away from the path of future leaks. 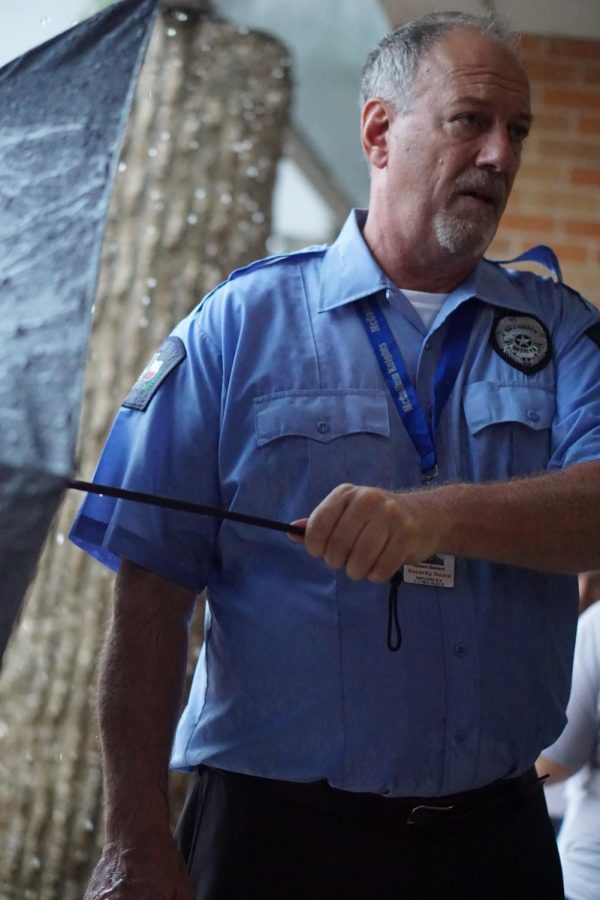 This was no typical Monday for Officer Bob Bedard. Not only did he need to continue his responsibilities as a security guard, but he had to take on the ones of being a traffic director. Towards the end of fourth period it began to pour, and the rain complicated the dismissal as the school had to hold students for an additional eight minutes. “Parents were parking in the bus lanes and some of them didn’t want to move even when they were asked to do so,” Bedard said. Caption by Isley Cameron. 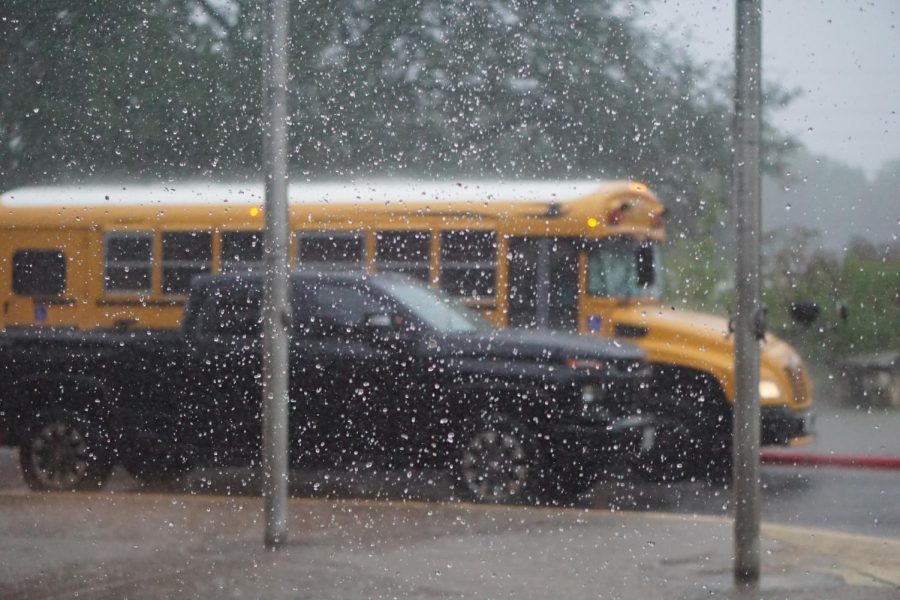 CATS AND DOGS: It was raining so hard just before and as the bell rang that district officials instructed school administrations to hold students in their fourth-period classes past the 4:30 bell. At McCallum, students stayed in their classes eight minutes past the bell. Bus drivers meanwhile were told to pull off the road until the rain abated. Student bus riders waited in the cafeteria until the busses finally arrived on campus. The last bus pulled away from the school at 5:25 p.m. almost an hour after the scheduled end of the school day. Caption by Dave Winter. 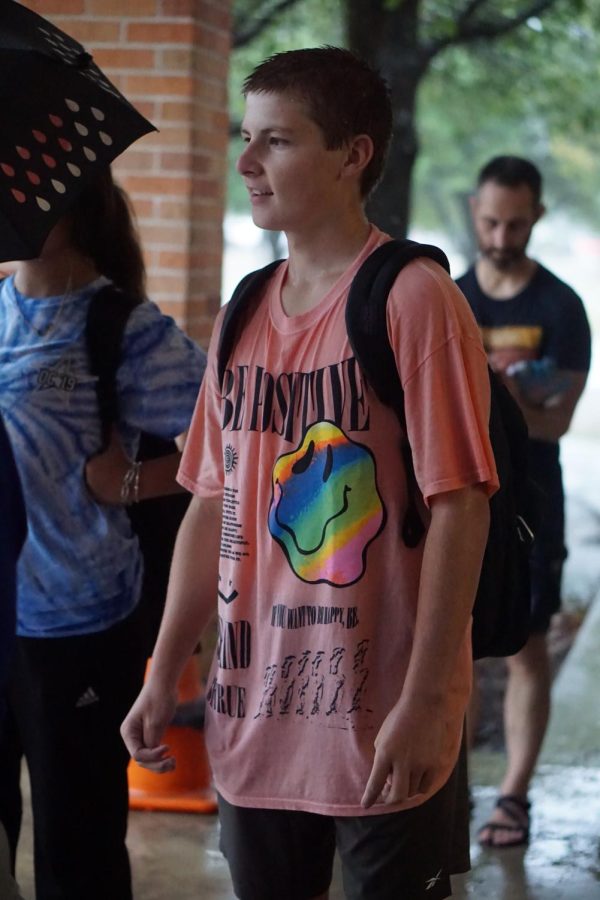 BUS STOP BLUES: Waiting for his bus, sophomore Henry Voorhees stands outside McCallum’s main entrance. Voorhees, like other students riding buses, had little information about when transportation home would arrive. “I was soaked, waiting for any word on what was going to happen next,” Voorhees said. “In that moment I was thinking ‘How am I going to get home?’” Voorhees’s bus arrived at 5:15, the time he usually arrives home. Despite the confusion of the event, Voorhees still found a silver lining. “I love the rain, and I was happy to see so much of it because we are in a drought,” he said. “It was also just fun to be there and watch the chaos unfold.” Reporting by Alice Scott. 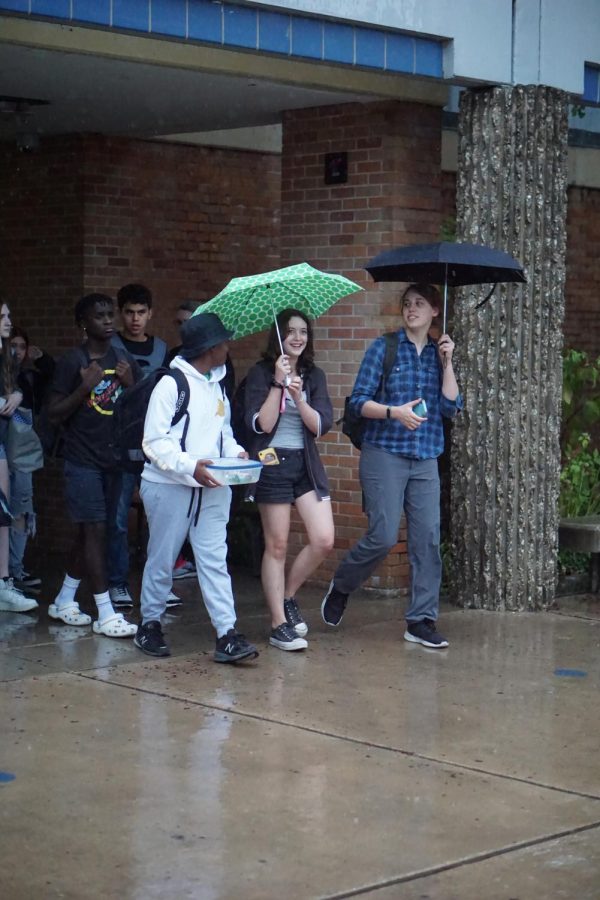 FORECAST FORETHOUGHT: Leaving from the front entrance of the school, juniors Sydney Piper and G Kahlor and Freshman Emily Piper prepare to step out into the rain on Monday afternoon. Though much of the Mac community was not fully prepared for Monday’s rain, both Sydney and Emily were ready for the wet conditions. “We looked at the forecast and knew to bring an umbrella,” Sydney said. “I’ll definitely be bringing one for the rest of the week too. Caption by Meredith Grotevant. 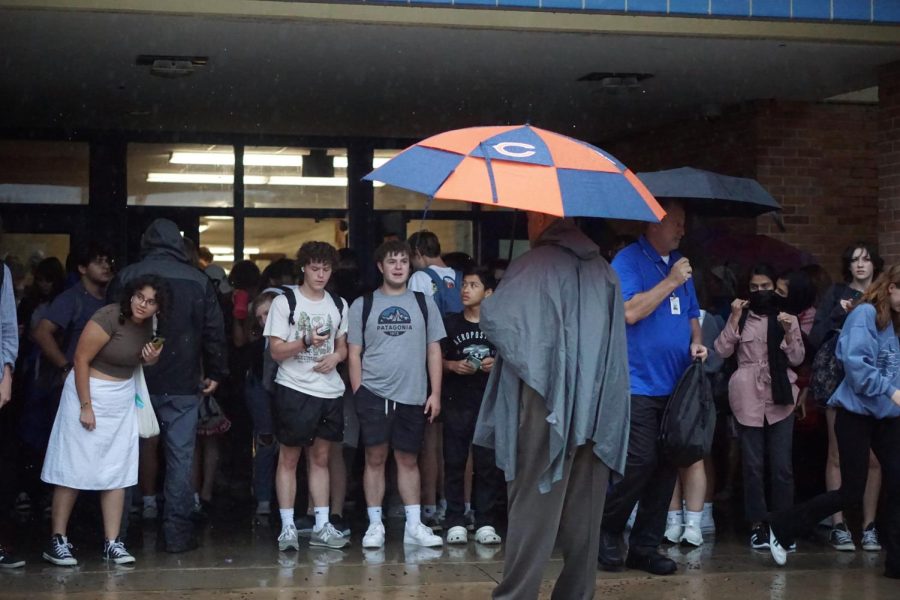 UNDER COVER: Just as it did for many, the rain derailed junior Chris Ferina’s ability to go home, allowing him to not arrive back till over an hour after school got out. When the AISD central office understood the weather had become too dangerous for anyone to leave, announcements went out to keep children in classes until buses were able to arrive and the weather became less dangerous. “I was kind of annoyed at first,” Ferina said, “but the rain was so bad it would’ve been too dangerous to let people out.” Eventually students were let out of classes eight minutes later than usual. Caption by Naomi Di-Capua. 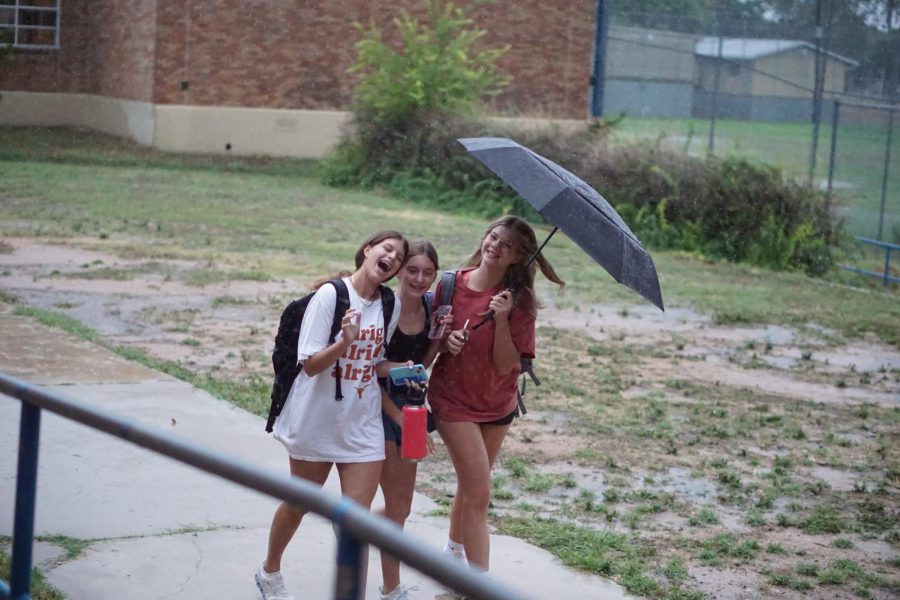 READY FOR THE RAIN: Freshmen Merrill Price, Stella Little and Lilia Williams share an umbrella during the rain on Monday. “We were excited about the rain because there’s been a drought recently,” Price said. The trio was trying to make it through the heavy downpour and into their cars after being held in their fourth period class thanks to a flash flood warning. “It was a little confusing,” Price said, “but otherwise exciting!” Caption by Francie Wilhelm. 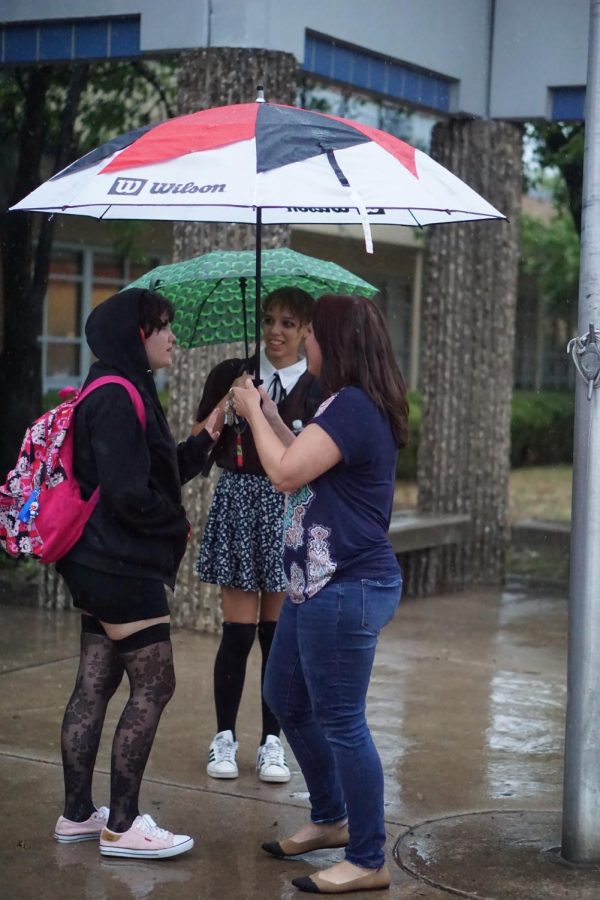 SHOWER AWAY SUMMER: Junior Blue Marin, junior Aislyn Traweek and Mac parent Susanna Marin wait under their umbrellas during Monday’s rain-filled dismissal. Traweek considers herself a rain person. In her mind, there is no better way to spend a day than sitting inside and drinking tea while listening to the rain patter down. It helps her focus, it helps her go to sleep and most importantly, it makes for an exciting school day. “I did dress cute for the rain because I was excited for it,” Traweek said. “I think we all needed this rain after experiencing the hottest summer ever.” Monday was the first day of the school year that Traweek brought an umbrella. It came in handy. Traweek was one of many students who was held in class for just under 10 extra minutes due to the storms. Some of the people in her class were so excited by the rain that they started taking pictures through the window. “I definitely wished for more rain,” Traweek said. “Just maybe slightly lighter rain next time. It’d be nice to have a light rain every day.” Caption by Ingrid Smith. 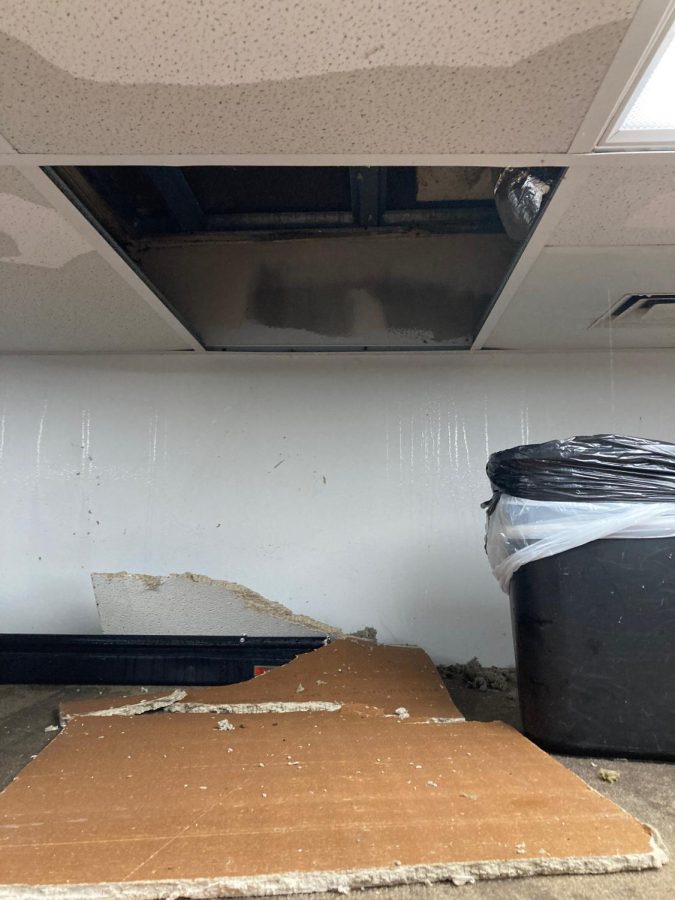 SOUND AND FURY: The band closet arguably received the worst damage of the many ceilings on campus that leaked, or in this case, became soaked through with rainwater. Assistant band director Ryan Pride first noticed the damage not because of a slow dripping sound, but because of the “wssshhh” of water pouring out from the ceiling panels. The new damage in the steel drum closet, however, wasn’t the only affected area of the fine arts building. “We also experienced some leaks in the main hallway of the fine arts building that soaked the cover of an instrument that, if wet, could become ruined,” Pride said. “Thank goodness we take care of our stuff by always covering it!” Several woodwind instruments, on the other hand, were not spared by the leakage and now need repair. “This isn’t the first AISD facility I’ve been in that has flooded/leaked due to rain,” Pride said. “Figure it out, y’all.” Caption by Caroline Owen. Photo by Oliver Harrington. 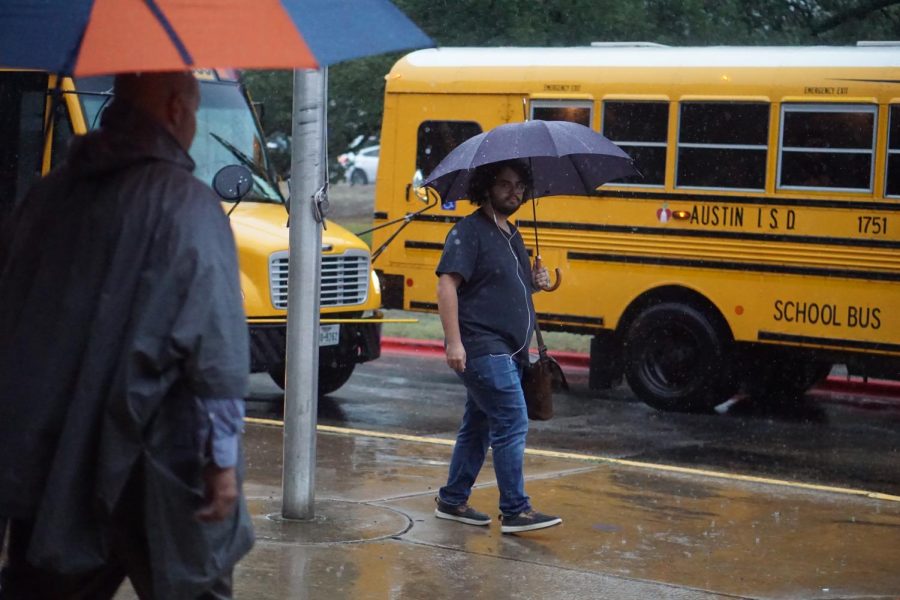 UNDER THE UMBRELLA: Junior Wilson Corbitt heads toward his dad’s car near the portables during Monday afternoon’s rainstorm. Corbitt faired better than some students, having the forethought to bring an umbrella to school. “In that moment I thought ‘I bet you all thought I was crazy for bringing an umbrella on a sunny day,’” Corbitt said. His intuition proved right, but Corbitt connects this occurrence to a larger issue facing Austin and the planet. “Every year the weather in Texas gets more and more unpredictable and severe due to climate change,” Corbitt said. “And that’s coming off the back of one of the hottest summers on record where today was the first day since May under 90 degrees, which is making it progressively difficult to tell what might happen.” Reporting by Alice Scott. 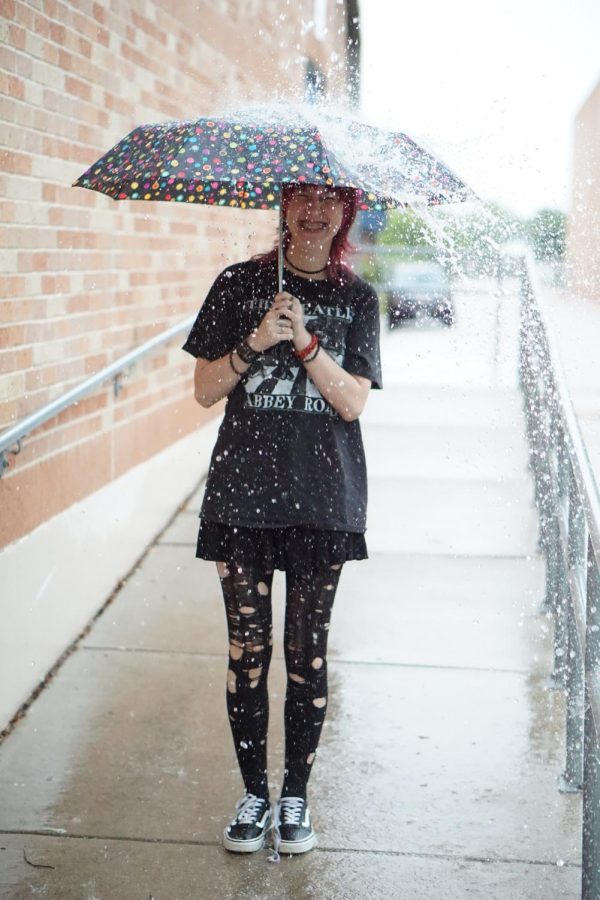 BEING CILLEY IN THE RAIN: For sophomore Cilley Phan, the rain wasn’t immediately welcome. “Before I went out I was pretty nervous,” she said, “I had to take the bus, and I didn’t want to get soaked, plus it’s a 15-minute walk from the bus to my dad’s house.” The disdain persevered as the torrents continued all through fourth period, “I was annoyed, especially since I didn’t have an umbrella,” Phan said. “Everyone else in my class seemed equally as annoyed, but it was in a funny way.” The promise of cooler weather and an overwhelming sense of gloom, however, pulled Phan out of the building. “Rain seems to give people a bad vibe. It’s really gloomy but I really like it,” she said, “I got my friend’s umbrella, we started playing, splashing in puddles and stuff. I felt like a little kid frolicking through the rain.” Caption by Helen Martin. 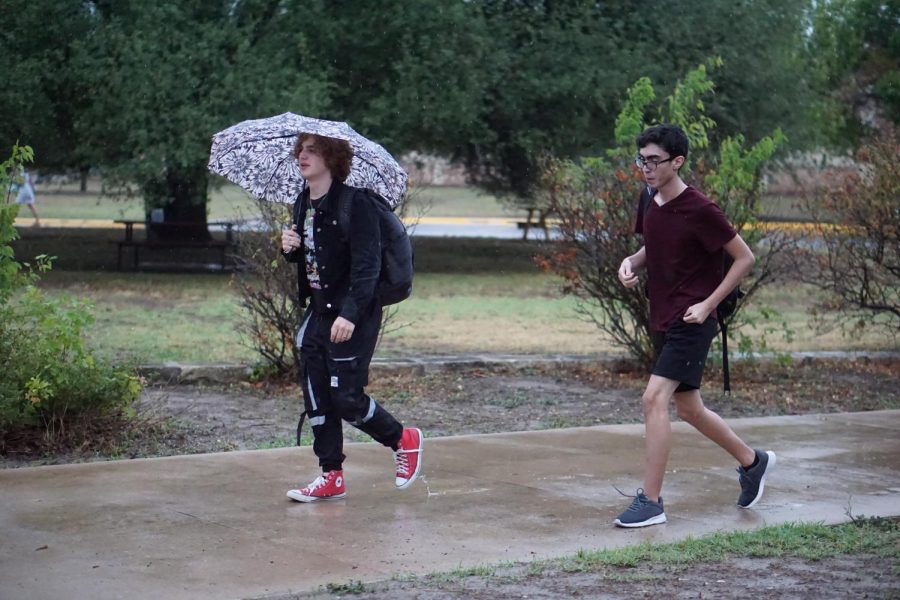 Juniors Jesse Silverman and Aiden Smith head to their bus after 5 p.m. on Monday. Silverman was heading indoors at the end of his eighth period AV class, when it began to pour rain. At first, Silverman had no complaints. “I think the rain was good,” he said. It was not long until he changed his mind. After another memorable Monday, Silverman alongside many other students felt frustrated while being momentarily stranded at Mac. “When the buses started to take forever, I just wanted to go home,” he said. Caption by Sophie Leung-Lieu. 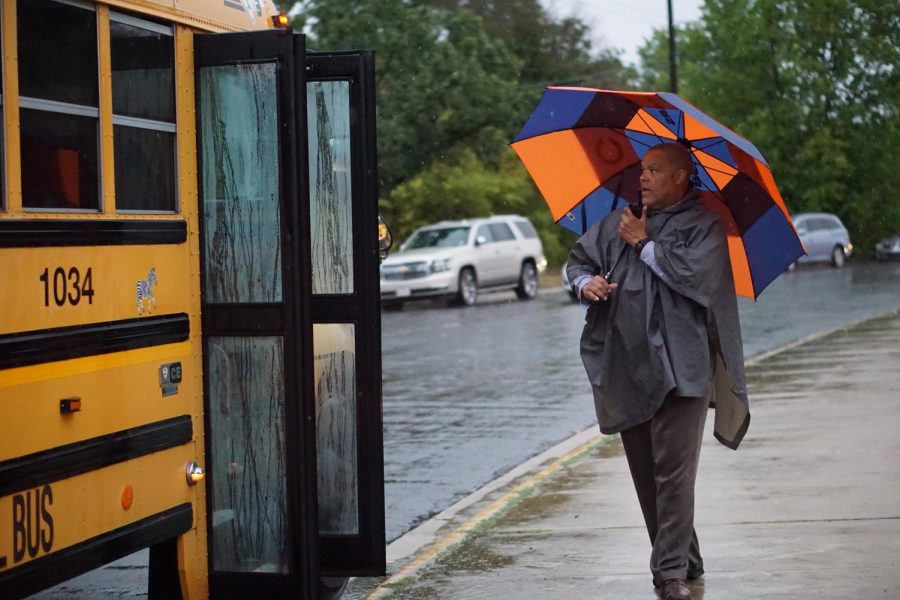 ALMOST THERE: Assistant principal Larry Featherstone checks to make sure there are no students in the cafeteria waiting to board the last bus before it departs from the front of the school just before 5:30 p.m. Caption by Dave Winter. 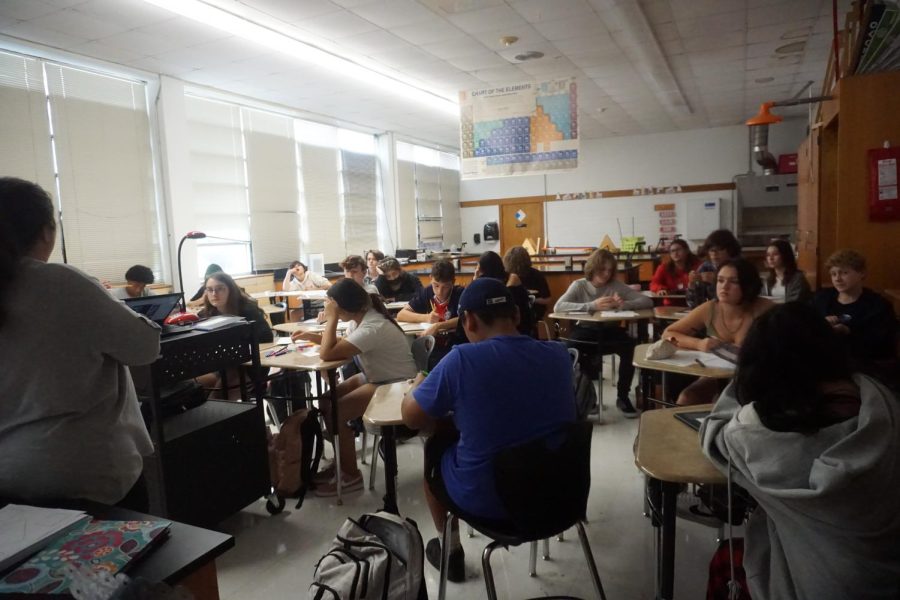 Science teacher Sarah Noack instructs her seventh-period class on Tuesday from the front of her classroom, which was one of many whose ongoing leaks returned upon the Monday storm. “I’ve been in room 141 for seven years now, so I know where the room leaks at this point,” she said. “First thing I do when I get here in the morning after a storm is go to my leaky spots and check for water.” In the past, lab supplies, bulletin boards, student work, and posters have been damaged by rainwater, forcing Noack to spend valuable teaching time cleaning up the mess and working around ruined supplies. According to Noack, the situation paints a bigger picture of the problems facing AISD infrastructure management. “To me, it’s a disgrace that we have had these issues for so long with no repair. The district has wasted countless dollars and personnel hours replacing ceiling tiles, but replacing the tiles doesn’t fix the leak.” Caption by Francie Wilhelm. Photo by Caroline Owen.

This story was originally published on The Shield Online on August 23, 2022.