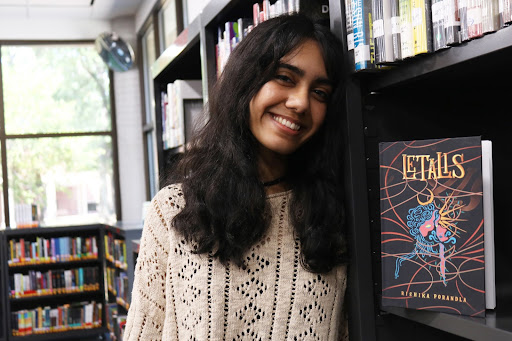 The towns appear to be packed with rapidly moving, bustling villagers who seem nothing other than ordinary at first glance, but when I focus on just one, it’s evident that a mystic glee radiates from them.

Settled in a seat at George Coffee & Provisions, Coppell High School junior Rishika Porandla types away at her computer, a story about political deceit and the corruption of power taking shape beneath her fingertips.

A labor of love since Porandla’s freshman year, the story would eventually evolve into a full length novel published on Aug. 15 for the world to see. But here, in this moment, Letalis is only for herself and the eyes of a select few.

Even from such a distance, I can make out the curvature of smiles as families dance around the streets, awaiting our arrival with such joyous anticipation that I wish to escape the silent battles of the palace to join them.

Porandla’s love for writing began in the creative writing competition hosted annually by the Coppell Gifted Association, in which students can submit personal writing to be judged and possibly published in a book of winning entries.

Competing for the first time in third grade, Porandla won first place in the fiction category and an honorable mention in the non-fiction category. The competitions have been almost a yearly occurrence for her since.

“I think back to that competition, and I remember the motivation behind that first year,” Porandla said. “It wasn’t hard to continue after that.”

Prior to Letalis, Porandla had only written short stories. Inspiration was everywhere, insistently pulling her towards something of a longer length. There was one short story in particular:

“I was extremely intrigued by the concept,” Porandla said. “It just wanted to be explored further.”

The concept eventually evolved into Letalis, a fantasy novel exploring the realm of power and what too much of it can do to a person.

It was a big leap: the word limit for entries in the CGA competition is 10,000 characters, which is typically about 20 single-spaced pages. By contrast, Letalis is 263 pages, filled to the brim with a fast-paced plot and social commentary driven by Porandla’s observations about the world.

“My book reflects a lot of themes that I was seeing in the news at the time,” Porandla said. “I was doing assigned readings for debate at the time, so Letalis reflects power struggles of the current political atmosphere in terms of governmental entities. I want people to be able to make connections between this fantasy world and what’s actually happening around them.”

The synthesis was natural for Porandla, who even at a young age was an avid reader. With the writing of Letalis taking place over two years, she would add more to the story in her free time, building the plot in her head even before she put it down on paper.

“She just has an inexhaustible amount of drive,” said Porandla’s elder sister Mounika, who assisted with copy editing for Letalis. “Even being the eldest, I take inspiration from her and the way she puts her mind to something and makes it happen. There’s something about the journey the characters go through in this novel that lingers with you.”

Also behind the publishing process was CHS junior Sia Arya, the cover illustrator for Letalis and a friend of Porandla’s since sixth grade.

It was late June when the opportunity was posed, Arya describes. One day, out of the blue, she received a text from Porandla asking if she wanted to design the cover for Letalis.

“I was surprised, actually, because I’d never done a professional project before,” Arya said. “But I said yes, and I’m glad I did. Honestly, I think that Rishika is the most talented writer I know. The way she writes is captivating, and she’s as eloquent a person as you would think when reading her work.”

Letalis came together in a crescendoing mad sprint towards the end of the summer, according to Porandla, but it wasn’t the result of more free time. In fact, Porandla says, she had much less time this summer to work on the novel.

“I got some really valuable advice from people around me [this summer],” Porandla said. “They told me that there would never really be a ‘right time’ to do this. If I didn’t publish this book now, I would never publish it. I’m really proud of Letalis, and I wasn’t going to take that chance.”

Amidst the coffeehouse chatter, Porandla sips her iced honey and vanilla latte. The drink is her favorite for when she’s writing. Words flow from her like a torrential downpour, crafting a vivid scene.

The children seem to carry an energy of their own, clutching vivid flags and tapestries in their small arms and devoting their bodily strength to painting the horizon with their hues. And that sky that they stand under––it’s perfectly crafted with the essence of a dulling sunrise mixed with the blue of the morning.

This story was originally published on Coppell Student Media on September 13, 2022.