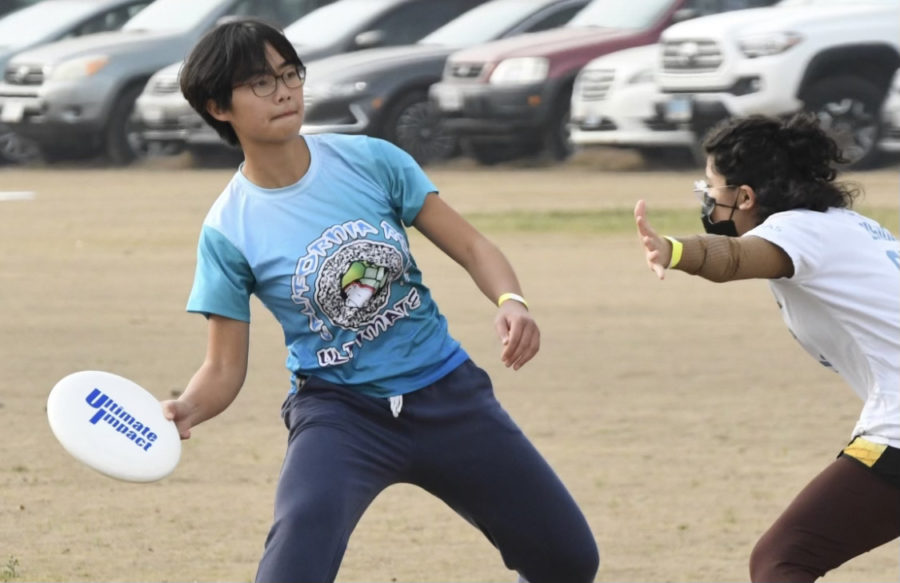 Rachel Chang throwing a forehand while being defended by a UCLA Midas Ultimate player during a game. Rachel recently spent part of her summer in Wroclaw, Poland with the women’s ultimate frisbee Team USA competing in the World Junior Ultimate Championships.

Think of that one kid you knew during the ultimate frisbee unit in P.E. class: jumping over people, tossing the frisbee inhumanly far, intercepting passes with grace and ease.

Yeah — they weren’t that good.

At least they weren’t good like Rachel Chang is good. Rachel, a Palo Alto High School senior, was so extra with ultimate frisbee that she went to Wroclaw, Poland with the U-20 American national team for the World Junior Ultimate Championships.

How do you get that good? For Rachel, the journey began in middle school. She had done track and cross country, but in eighth grade, she wanted to try something new. After beginning with a summer learn-to-play clinic, she joined Heartbreak, a Bay Area ultimate frisbee team for girls affiliated with Gunn High School.

“I just went to one of their practices, and I was hooked,” Rachel recalled.

Eliza Chang, one of the coaches for Heartbreak, remembers some natural initial shyness from Rachel.
“Kind of reserved, humble, quiet,” Coach Chang said. “She was fiery, too — a quiet fire.”

Throughout high school, Rachel would continue to grow and improve, becoming a captain on both the Gunn team and Heartbreak as it became clear to everyone that she was no ordinary player.

When Robert Srinivasiah, one of the Gunn coaches, saw Rachel play for the first time, he and fellow coach Joey Ricks were both blown away.

“[Joey and I] both instantly had the same reaction: this girl does not need a coach, there’s no point at all,” Srinivasiah recalled. “It’s ridiculous.”

Upon seeing her play for a little longer, he quickly reached a conclusion: “I didn’t know somebody her age could throw like that.”
So when Rachel decided to apply for the American U-20 national team in late 2021, despite the intense competition, there was little doubt in her coaches’ minds that she’d make the team.

“Just from what I’ve seen… of her ability to show up despite nerves, despite pressure, and do the things she’s really good at. She has an all-around strong game… I was like, ‘Not surprised,’” Coach Chang said. “But then, probably, she won’t say that to you. That’s who she is.”

Srinivasiah echoed Coach Chang’s excitement, as well as how much Rachel deserved the opportunity.

“She’s really the total package as a player and a person,” Srinivasiah shared. “And she… doesn’t always realize that.”

Manisha Daryani, the U-20 national team coach from the west coast, had known Rachel for a while before she came to Team USA tryouts in the spring of 2022, and believed in Rachel’s chances of making the team.

“With a national team, you’re kind of putting together pieces, and figuring out what pieces you need,” Daryani said. “Or, if you have a piece you really like, you kind of figure out how to pair something around it. Rachel was the latter. You look at a player like Rachel, and say… ‘Okay, if we know we’re bringing Rachel on, what players do we build around her?’”

A particular asset in Rachel’s skill set that helped her make the team are hucks, essentially long, powerful throws. This made her perfect for the position of a handler, someone whose role focuses on throwing — but it goes beyond that.

“She’s not just mechanically a strong thrower — her ability to read the field and to place the disc exactly where she wants it… it’s next level,” Coach Chang explained.

Daryani echoed this, describing Rachel as a very analytical player.

“You can see the gears turning in her head [after a play],” Daryani described. “And you’re putting her in [for] the next point, and you’re like, ‘Nope, I don’t have to say anything. The gears already turned. She knows it.’… We really gave her a very big role and told her to run with it, and we did so because we were confident that she was up for the task.”

Once Rachel had officially made the team, not much happened until the team met in Colorado in June 2022 for a training weekend. It was an intense couple of days — six to eight hours of playing and learning strategies each day.

“It wasn’t really the best ultimate we’d ever played, but we got to know each other and how we played,” Rachel said.
The team didn’t see each other for almost another month and half until they met in Chicago for a training camp a week before the Worlds tournament started.

“In any other situation where I was meeting that many people, I would have been completely overwhelmed because I’m just not naturally a person who is super extroverted and I definitely need that downtime,” Rachel shared. “But I think we were really understanding of each other. When I needed emotional support, my teammates were always there for me. When I needed distance or quiet time, I could get that too. They were just some of the nicest people I’ve ever met, and the greatest players I’ve ever played with.”

This made the tournament all the more enjoyable, and when the team left for Poland together in early August, they were ready to live up to their first-place seed. But when asked how the tournament went as a whole, Rachel’s first comment was on the living situation.

“With European accommodations, I don’t think it’s normal for places to have AC and we definitely didn’t, so it was a little hot the first night,” Rachel laughed. “And there was one bathroom for the whole floor — that was exciting.”

Accommodations aside, USA dominated the competition, opening with a 15–2 win against Germany right out of the gate. They finished in the finals against France with a score of 14–12, the closest of the tournament.

While Team USA did emerge undefeated, they were not without their challenges. Most players were used to having very set lineups, but the USA coaches hadn’t specified who would be on which lineup and were shifting around lineups in the first few games. This didn’t give Rachel and her teammates the chance to get to know each other’s playing styles as well as they’d have liked prior to the tournament. During games such as the one against Canada, this lack of intimate knowledge about each other provided a challenge as Canada shut down the plays they had set up.

“It was hard to trust each other because we didn’t really know what to do outside of that set system [of plays], so we really had to just go back to the basics and remember how to play easy frisbee,” Rachel said. “After that, we trusted each other a lot more for the finals versus France.”

It was in games such as the ones against Canada and France where Rachel was able to exercise the leadership that her coaches had entrusted her with, helping to carry her time to first place.

“To walk onto the field — she was one of the youngest players we took on the national team — and to say, ‘Not only do I belong here, I’m gonna help lead you,’ that’s the role we gave her,” Daryani said. “Which is frankly, a lot of pressure, for anyone. And for Rachel, I can imagine that that felt heavy, but she did a very very very good job of not letting it show.”

Srinivasiah explained exactly what kind of leader Rachel is: the kind of leader that focuses on supporting her teammates rather than bossing them around.

“She is better at trying to figure out how she can help someone frame information in a way that is palatable for the person she’s giving the feedback to, and then following up later,” Srinivasiah said.

In reflecting on Rachel’s performance during the Worlds tournament, Daryani had one clear, overarching impression.
“She’s like an assassin,” Daryani laughed. “She’s really calm. I mean, I know that she carries a lot as a person, but she puts a great deal of effort to not bring that on the field and to just, ‘do the job’… that is a great deal of discipline.”

It’s been several weeks since the end of the Worlds tournament, but Rachel’s journey with ultimate is far from over. She has plans to continue in college and hopes to make the even more competitive U-24 national team. Rachel has also joined Coach Chang as a member of a nationally competitive Bay Area adult ultimate frisbee club, Nightlock, now teammates with her former coach.

“She just blew everyone away,” Coach Chang recalled. “You know, the classic: ‘Oh my god, she’s seventeen years old, just give her a few years, she hasn’t even played in college yet, she’s gonna be amazing.’”

But Coach Chang doesn’t see Rachel’s young age as a barrier to her being on Nightlock.

“I think kind of naturally when you’re a player who is so talented, such as Rachel, people, regardless of your age relative to your teammates, really just start to turn to you as an example, whether or not you want them to,” Coach Chang said.

Srinivasiah thinks that the Worlds tournament will help Rachel handle the leadership that others give her because of the confirmation it gives her.

“She is still kind of building her own confidence in herself, which is pretty crazy, because I’m like, ‘You can do whatever you want,’” Srinivasiah said. “… I was really happy for her to have that external validation. You know, she needs a little bit of it. I think everybody does.”

Like any other player, Rachel has still got things to work on — according to Srinivasiah, it’s her ability to express her already-amazing strategy sense to other people — but her talent is undeniable.

This story was originally published on The Talon on September 15, 2022.