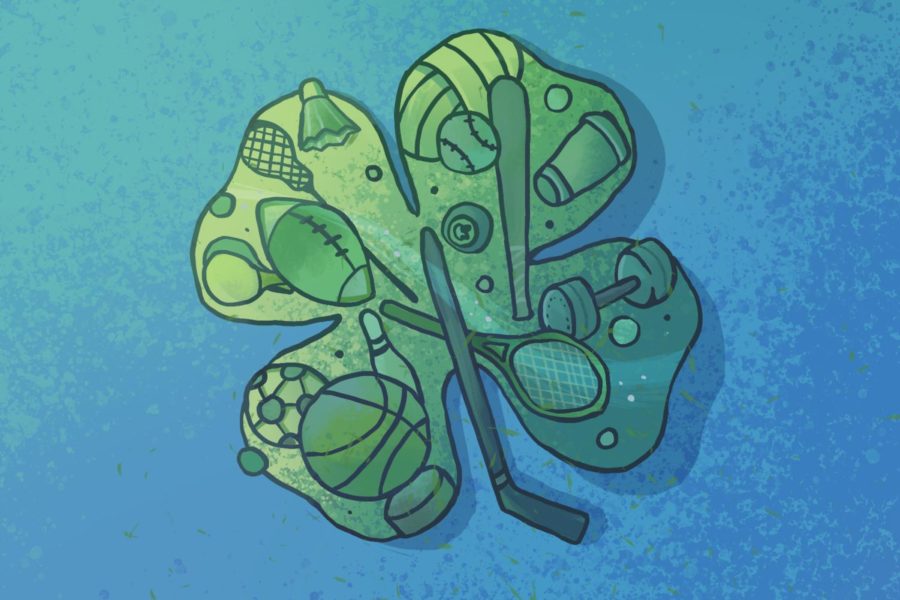 Whitman’s athletes don’t just dedicate their bodies to their chosen sport; off the field, rink, court or boat, their sport is a lifestyle. Athletes fill their closets with pre-game spirit wear and spam their friends with game posts on Instagram. The enthusiasm comes from the tight-knight community within — a breeding ground for traditions and superstitions.

Most of the team’s rituals take place on game days, where it’s easy to spot a lucky pair of socks or a necklace charm as students fill the halls. The girls varsity lacrosse team is an example of this with their tradition called “Post” for many years.

“‘Post’ is one of our biggest superstitions,” said former captain Maddie Shavitz (‘22). “We all line up on the eight-meter line and we try to hit one of the posts of the goal. If you hit it, it’s good luck for the game, and we always do it.”

“Post” takes place in a meticulous order, beginning with underclassmen and finishing with the team’s coaches. Many players, like sophomore Faith Howell, believe that unequivocal victory comes when a coach hits the post.

At least one player or coach hit the post during each of the team’s 13 pre-game practices last season, according to Shavitz. The team ended its regular season undefeated.

As one of the four players who made varsity as a freshman last year, Howell explained that “Post” is a significant right of passage for the team’s underclassmen.

“It’s an important part of team bonding,” Howell said. “I know it’s not like team dinners or breakfasts, but it’s something fun to do at the end of each practice — even if the practice was difficult.”

While many Whitman athletes take their traditions seriously, former girls varsity lacrosse defender Nicole Pines (‘22) takes hers to the next level and wears her good-luck charm to every important life event.

“I got this necklace on Depop during junior year,” Pines said. “The week I got it, I got my best score on my ACT, a shoutout at my job and I made varsity lacrosse. I realized the necklace was lucky, and now I wear it when I need good luck.”

Pines’ teammates accepted her personal lucky charm as the team’s talisman after a tied game that lasted two days. After several of Pines’ teammates touched her necklace, the team claimed a victory against B-CC in an excitingly close game. For the rest of the season, gathering around Pines’ necklace before each game became a tradition that athletes hoped would lead them to victory.

“I wear it before every game,” Pines said. “Since you have to take your jewelry off, I take it off at the last second. Before every important game, I have people touch it, but only the same people who touched it before the B-CC game so you don’t mess up the luck.”

Varsity rower Daria Hu-Henderson, a senior, believes that wearing uniforms during practice brings bad luck to the boats and ensures that the rowers won’t race well, she said. This superstitious tradition started long before she joined the crew team, according to Hu-Henderson.

“When the freshmen or new sophomores get their racing uniforms, the upperclassmen say, ‘Never wear it to practice. It will bring bad luck,” Hu-Henderson said.

Other athletes at Whitman, like former varsity ice hockey captain Henry Cheetham (‘22), have turned their personal rituals into teamwide activities. At the start of the season, Cheetham would bring his own pre-workout powder and “smelling salts” — a common practice among athletes to sustain energy by increasing blood flow — to the locker room to get amped up before taking the ice, he said. Soon after, many of his teammates joined in on the routine.

“I started bringing pre-workout to games and people caught on pretty quickly,” Cheetham said. “Then it evolved into smelling salts as well. So by the end of the season, we’d have a little circle before we go out on the ice.”

Regardless of whether these ritual’s impact the players, Cheetham believes that it helps the team forge tighter communities — a factor which helps get the players ready to play.

“It gives us all something to do before the games and it gives [us] a central thing to get everyone locked into the right place before we get out on the ice,” Cheetham said. “Rather than just getting dressed and having a little pregame speech, we all have a final thing in the locker room, which is nice.”

This story was originally published on The Black & White on September 2, 2022.