The Student Court unanimously ruled in favor of Pi Kappa Alpha regarding the Interfraternity Council violating due process. However, the court also ruled 2-1 against relieving sanctions from the Greek organization. 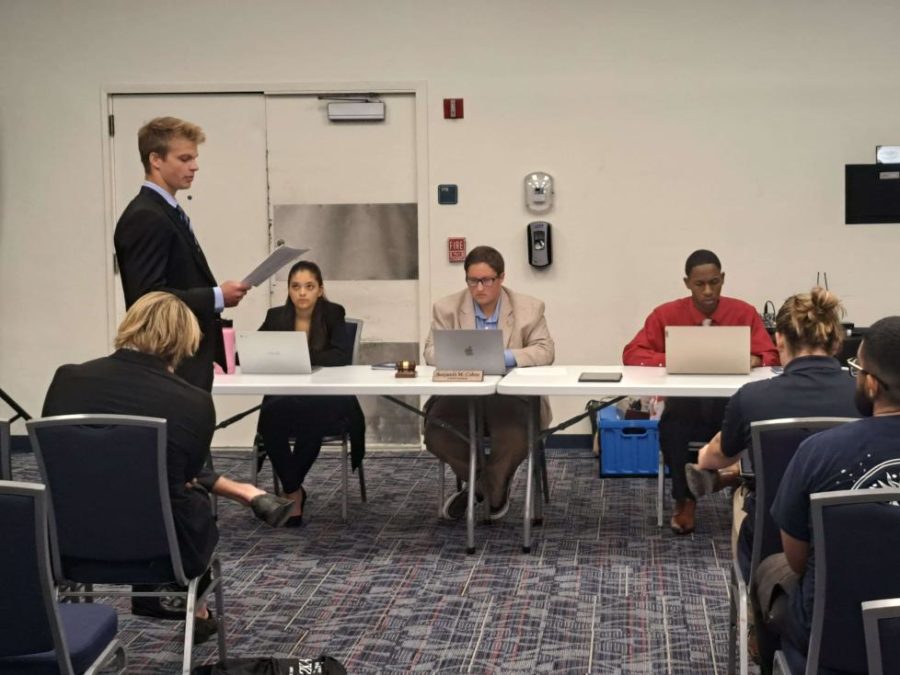 The Student Body President's Executive Assistant John Dunn (pictured standing to the left) represents Pi Kappa Alpha in its case against the Interfraternity Council during the Student Court hearing on Sept. 12, 2022.

The Interfraternity Council is responsible for being fair and transparent in its judgment for all the fraternities residing in FAU. Pi Kappa Alpha (Pike) feels they have done the opposite.

On Sept. 12, the Student Court unanimously ruled the IFC violated Pike’s right to due process regarding the implementation of sanctions against the Greek organization.

The IFC imposed sanctions on Pike during the Spring 2022 semester for violating the suspension the Dean of Students placed on them that was set to finish at the end of the term. Though they were not permitted to have wet social events, which are events involving alcoholic beverages, Pike co-hosted an event with Beta Theta Pi on Feb. 12.

According to the sanctions the IFC placed, Pike is unable to host or co-host wet events from Aug. 20 to Sept. 20 and can not hold Bring Your Own Beer events from Sept. 21 to Oct. 21.

Pi Kappa Alpha filed a petition on Sept. 1, requesting the Student Court to waive its sanctions due to the IFC breaching due process.

The IFC issued its response on Sept. 4, denying the charges Pike made against them.

“We followed through with [the] judicial process, recommending a loss of social events which entailed no hosting or co-hosting of any wet events such as BYOB, third-party vendors, and tailgates,” IFC President Colby Smith wrote. “Pike signed in agreement to these sanctions after their informal hearing, waiving their rights to an appeal or a formal hearing.”

Despite the ruling, the Student Court voted 2-1 against relieving Pike’s sanctions. Associate Justices Sivon Tal and Quincy Thervil were the “no” votes.

“The Student Court finds that it is not the place of the Court to either completely or partially waive the sanctions,” Cohen said. “Because this generally falls within the scope of IFC and they had the right to grant that sanction, the Student Court does not believe that granting this relief is warranted.”

Cohen was the lone vote in favor of relieving the sanctions.

“Partially waiving these sanctions is reasonable for the due process rights that the Student Court determined the Respondent had violated,” Cohen said. “Because of this, the Student Court both has the authority to grant this relief and some relief was warranted in this case.”

Regardless of the ruling, John Dunn, the executive assistant of the student body president, said Pike will still face hardships.

“Rumors swirl around campus that we’ve done something horribly wrong, and we really suffered because of this and this suffering [isn’t] going to go away by ruling in our favor,” Dunn said. “So I stand here before the honorable justices in asking you to take a stand and set the good precedent that due process, fairness, and justice must be followed as written in organizations’ bylaws.”

The hearing began with opening statements as Dunn spoke as a representative for Pi Kappa Alpha, with the fraternity’s president Connor Scott also in attendance. He said his goal was to establish the precedent that the IFC must follow all their bylaws and guidelines throughout the judicial process.

“Despite what they may argue, the bylaws must be followed as written and not selectively deployed,” Dunn said. “I want to protect the future of fraternity life here at FAU, and this hearing is a critical turning point.”

The IFC defended its decision to impose sanctions on Pike based on a sample judicial guide from the North American Interfraternity Conference, a trade association representing national and international men’s fraternities, saying they must follow all rules and regulations set from it.

“That’s why the IFC is like a judicial governing body: to kind of keep control of all fraternities because in modern-day fraternity life, there’s a lot of things that go wrong,” said IFC Executive Vice President Seth Gorton. “We follow that guide step-by-step, as that is provided by our national organization.”

However, the Student Court did not view the judicial guide as an official document the IFC can use.

“When reading the guide, it clearly labels the document as a resource for judicial affairs officers and as a sample for new IFCs to create their judicial procedures,” Cohen wrote in his decision. “With all justices concurring, the Court found that the judicial guide published by IFC does not count as an IFC governing document.”

Kade Born, president of Beta Theta Pi, was one of the witnesses to speak at the hearing. His organization also had sanctions due to the aforementioned event with Pi Kappa Alpha on Feb. 12. When Born tried to have then-Pi Kappa Alpha President Tony Velazquez appear as a witness in an informal hearing separate from Pike’s, the IFC turned him down.

“He tried to deploy his right to call a witness in his informal hearing and the IFC EVP denied him that right, so due process [was] further violated,” Dunn said. “It’s not just our fraternity that this is occurring with; there [are] other organizations that are being treated unfairly.”

Gorton countered Dunn’s claim, saying because he brought Born in for an informal hearing and not a judicial meeting, no witnesses had to show up.

“The reason why Tony was not allowed into this case is because as two separate organizations, we can’t mix consequences. It’s Beta’s consequences and Pike’s consequences,” Gorton said.

Gorton said the IFC’s goal is to make sure fraternities at FAU are holding events that ensure everyone’s safety.

This story was originally published on University Press on September 16, 2022.