JJ Carbon was in a car crash where he suffered multiple serious injuries. He now works mentally and physically to get back to where he was. 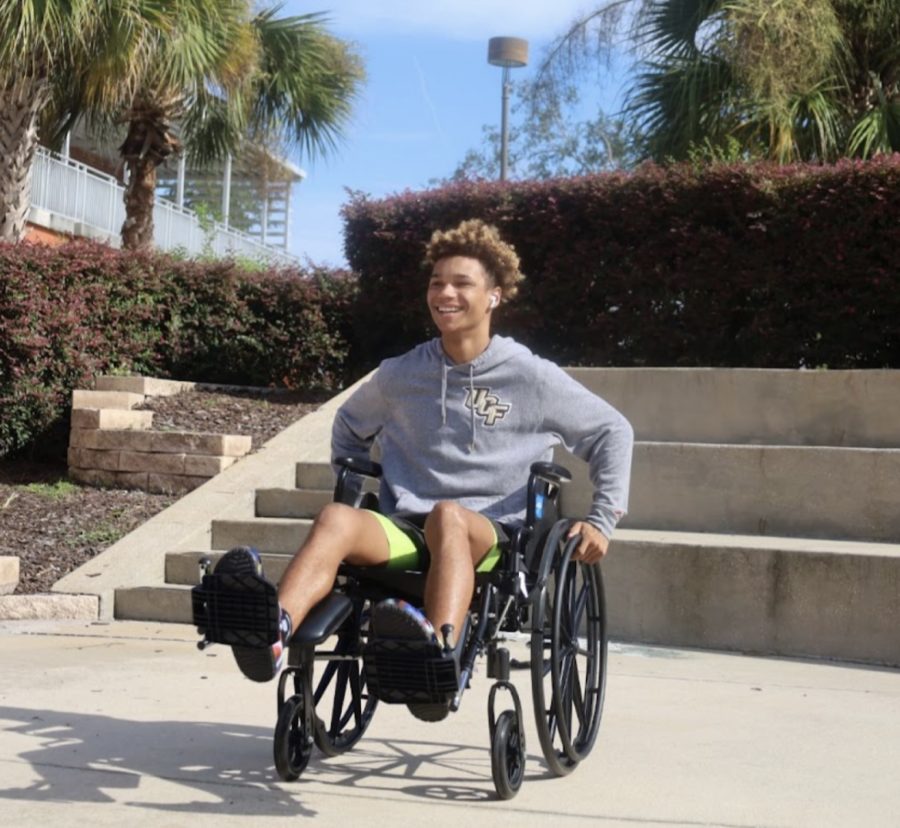 JJ Carbon comes back to school after not being able to come for the first two weeks. Carbon was in a car accident that led him to have multiple serious injuries.

When junior JJ Carbon left his friend’s house, he expected to go home and have a fun night before the school year started. He was helping his friend figure out how to play a phone game when, out of the corner of his eye, he saw a car pulling out in front of them. He pointed at the car and shouted to driver Austin Yonkin, but it was too late.

“I woke up with blood dripping out of my mouth,” Carbon said. “As soon as I realized what happened one of my older friends got me out of the car because it caught on fire. I just fell to the ground.”

Carbon was in the passenger seat driving to his house on 419. They were nearing the Publix before the intersection of 419 and Snow Hill Road, going straight, when a car pulled out of the Publix parking lot running a stop sign. Yonkin thought the car would see them and stop, but it kept going.

Carbon’s car impacted the back left side of the other vehicle. Both vehicles spun out in opposite directions, and Carbon’s car went over the median straight into a tree. The car started to smoke and caught on fire. Multiple people in the surrounding area rushed to help and were able to get Carbon and Yonkin out of the car before the fire could reach them.

“After they took me out of the car, I felt like I was dead—I was going in and out of consciousness,” Carbon said.

When first responders arrived at the scene, they conducted five trauma alerts to let the hospital know there were severe injuries, and immediately transported them to the hospital. Carbon had a broken femur, hand, and two bones in his shoulder, and suffered whiplash and a concussion. Carbon and Yonkin were transported to the Orlando Health trauma center to be checked for any life-threatening injuries. Yonkin went into emergency surgery for internal bleeding and two broken vertebrae in his back.

“They had to remove around a foot of my intestines and a part of my colon because of how damaged they were,” Yonkin said.

The police shut down that part of the road for around three hours to conduct an investigation of the crash. It was determined that the car that came out of the Publix parking lot was at fault for not yielding to a stop sign.

The Oviedo Facebook group was filled with people’s opinions of the accident. Everyone assumed that it was Yonkin’s fault because he and Carbon are both teenagers. Some rumors going around were that they were not wearing seatbelts and were not paying attention.

“In a matter of minutes everyone in Oviedo knew about the accident,” Carbon said. “No one knew the real story of how it happened, and most assumed we were at fault.”

Carbon, a varsity football and baseball player, had been looking forward to his junior year since it meant the start of the recruiting process for college athletics.

“The first thing I remember thinking after the accident was ‘How am I supposed to continue to do what I love?’” Carbon said. “I was looking forward to this season to get recruited and get a scholarship to go to college, at that time it seemed like my dream was ripped away from me.”

Carbon missed the first two weeks of his junior year to heal. He is now back at school in a wheelchair and continuing his healing process mentally and physically. He has been cleared to walk and lightly jog in small amounts. The doctors believe there will be a long road to recovery, but he could possibly be back for baseball season this spring.

“I am starting physical therapy for my femur to try and gain the strength back in my left leg,” Carbon said.

Yonkin has come home from the hospital and has been able to walk around and do some daily tasks. He has to sleep with three pillows under his back to make an arch and has to attend physical therapy.

Carbon’s goal is to be able to play baseball this coming season and is willing to do anything he can to heal as quickly as possible.

“He is a great kid, he is just one of those people that you can never replace,” varsity assistant baseball coach Jacob Colquhoun said. “He can and will bounce back from this, his athleticism is one of his best qualities and I look forward to when he steps on the field again.”

Carbon and Yonkin both have GoFundMe pages set up to help contribute toward their medical bills.

This story was originally published on Hagerty Journalism Today on September 12, 2022.