Back to the beginning

After 27 years, Webster returns to McCallum, this time as adviser of the Knight yearbook and commercial photography teacher 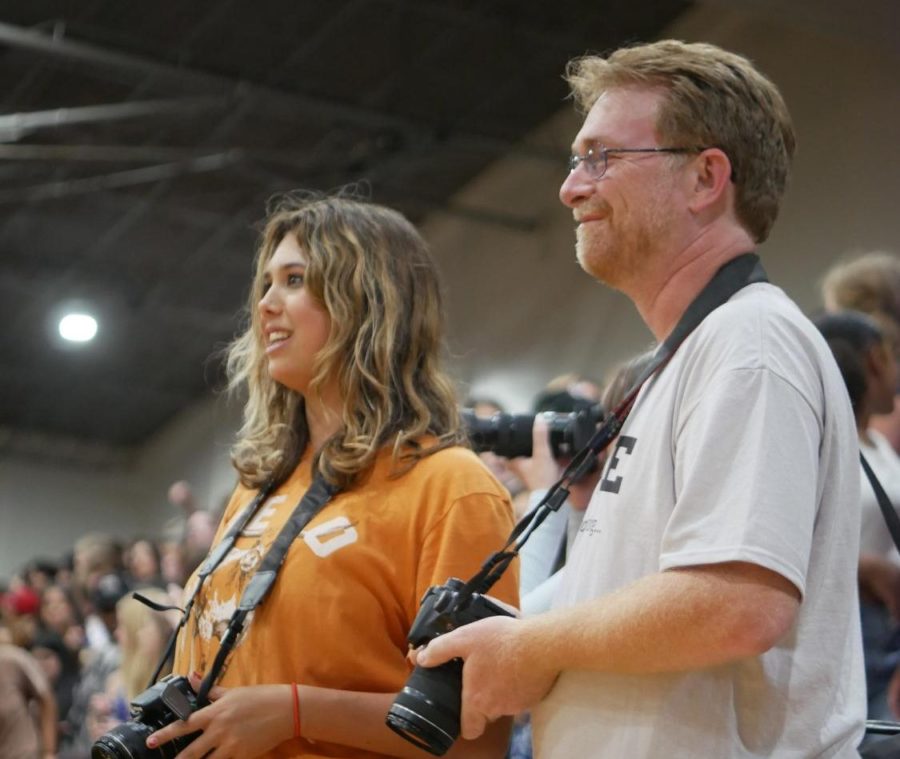 “I hosted a coffee pot in my classroom, not because I’m addicted to coffee, but because I always wanted other adults in my classroom,” Webster said. “Teachers would come in every morning to get a cup of coffee and that was important to me, because they were coming in and observing my teaching — sometimes becoming a part of what was going on in the class. I trusted those professional educators, enough to have them in my room every day, to receive criticism and suggestions if needed, and to share ideas.”

Coffee and conversation were first on the agenda in Webster’s Kealing classroom — a routine developed and perfected during his 26 years of teaching at the school.

“I loved being on a team with him because he was always willing to try something new,” Webster’s co-worker Sarah Waggoner said. “I learned so much from him. He helped me be the best teacher I could but also helped me not take anything too seriously.”

Webster found his groove at Kealing. From new teacher to veteran, he was able to experiment with different teaching techniques.

“I could hone my craft as an educator and learn what worked and what didn’t work, and I was given the freedom by administration to do that,” Webster said. “I think Kealing was and still is a special place where they give the teachers autonomy, as long as we’re working toward improvement so we can do what’s best for our craft.”

But this year is different. Very different. This year, Webster is trading his Hornet stripes for the gray and royal blue colors of the Mac Knights. But the much more complicated change: swapping his English and songwriting courses for yearbook and commercial photography. The change may seem abrupt, but Webster’s new position and future at McCallum go all the way back to when he first started teaching.
The past
1996: Fresh out of his Texas State University teaching certification program, Webster took a job as a permanent sub at McCallum High School. He had to. From the time he first visited McCallum classrooms during his teaching certification, Webster knew there was something special about the school.

“My first experience of just observing teachers in the wild and taking notes on what they did and learning the craft was at McCallum,” Webster said. “That experience was great.”

But it was his experience student teaching for English teacher Robert MacArthur that sealed the deal.

“I learned more about the Iliad sitting in one of his classes than I had in studying it through college,” Webster said. “MacArthur taught both freshmen and seniors and I really enjoyed seeing kids at the beginning of their high school career and at the end. I think it gave me a real sense of how the entire school operated.”

As a permanent sub, Webster’s duties shifted daily. He bounced from working as a hall monitor to special education to English as a second language to physics. And if there wasn’t a substitute job to take, he would work in the library alongside the librarian.

“I loved being the permanent sub there because I was spending time in every single classroom. And I knew every single student in McCallum. I got to see how the whole place worked on a very specific scale with every classroom and with every student. That’s why I’ve loved McCallum for so long.”

Later in the year, Webster became long-term sub for Niki Sorto, teaching freshman biology for 10 weeks while she was out on maternity leave.

“I don’t think I did it very well,” Webster said with a laugh. “Hopefully Ms. Sorto has forgotten about that.”

The following year, Webster took a job at Kealing but always hoped he might find his way back to McCallum.
The present
Twenty-seven years later, Webster has returned to his beginnings, this time teaching new subject matter.

“I think the yearbook adviser gets to know the school better than anybody, top to bottom,” Webster said. “We know everything that’s going on as far as the culture of the school. I already know that McCallum is an incredible place with wonderful, talented creative students. And as yearbook adviser, I feel like I’ll have a good sense of what makes McCallum special.”

So far, Webster has focused on team building and forming relationships with his students among the Knight yearbook staff.

“He wanted to wed the class, so he gave a ceremony; we got wedding cake, we got rings,” senior editor-in-chief of the Knight yearbook Charlie Partheymuller said. “It was to show that even though we’re in two separate yearbook classes, where we’re one staff together, and he wants us working together on everything. So he’s doing a great job of getting the team on board.”

Although Webster lacks prior experience as a yearbook adviser, he is driven to support his students with the skills he already has and the ones he continues to acquire.

“He pushes students to think more deeply and imagine themselves as academics,” Waggoner said. “Many a latent writer has emerged from his classroom with newfound confidence.”

Webster’s skills as an English teacher prepared him for the writing portion of yearbook. However, there are many other aspects that he continues to learn.

“Yearbook is a much more multifaceted project than I’m used to,” Webster said. “Everything that goes into it from sales, and marketing, and graphic design, and writing is a lot more than a skill set that I would use as an English teacher. And it’s honestly a little bit intimidating.”

Webster attended both the Gloria Shields NSPA Media Workshop and ILPC teachers workshop at UT over the summer in preparation for becoming a yearbook adviser.

“I have never, ever felt as supported in a new venture, in my entire life, as I do in this one, where so many people have come up to me and just said, with perfect sincerity, ‘If there’s anything I can do to help you, let me know,’” Webster said. “David Winter has been incredible. There’s all these people who have done this before and want me and my students to be successful. That’s huge.”

Although he feels prepared for the year, he knows that in the realm of education, there is always more to learn.
The future
As the school year continues, Webster hopes to learn from the yearbook experts on campus — his students.

“Hopefully, the kids are going to be teaching me a lot in this first year,” Webster said. “I don’t want to come in and shake things up. I need to spend a lot of time listening to the kids to find out what really worked last year and what we might need to change and let the kids take the lead on that and then do my best to guide and support them through that.”

Currently, Webster is selecting section editors and setting up the staff to begin production of the yearbook.

“As much as I’m learning to be an EIC and take charge, he is learning to be a yearbook teacher and teach the class,” Partheymuller said. “So it’s we’re just learning fixing out the kinks and building the team first.”

Webster hopes to step into a coaching role as the yearbook adviser, working to help students along the way.

“It’s exciting just to see kids who can do something after being in my class that they couldn’t do before,” Webster said. “It turns on this light switch for them and suddenly, it becomes part of who they are. So if there’s a skill, whether it’s designing a page, or working with a team, or simply writing a thank you note to a friend who helped you in a class, all of those things go together to build into things that they might not have done before, but will become part of who they are. It changes the fabric of who they become.”

Despite the many changes to Webster’s schedule this year, his philosophy of teaching stays the same. And although his coffee pot did not follow him to McCallum, its meaning still remains: an open opportunity for communication, critique and conversation with both students and colleagues.

“What I’ve always loved about McCallum is somehow there’s a sense of belonging that other schools don’t seem to quite have,” Webster said. “ I’m looking forward to that sense of community being really present. I think one of the best things about McCallum is that it hasn’t changed much in 27 years.”

This story was originally published on The Shield Online on August 31, 2022.