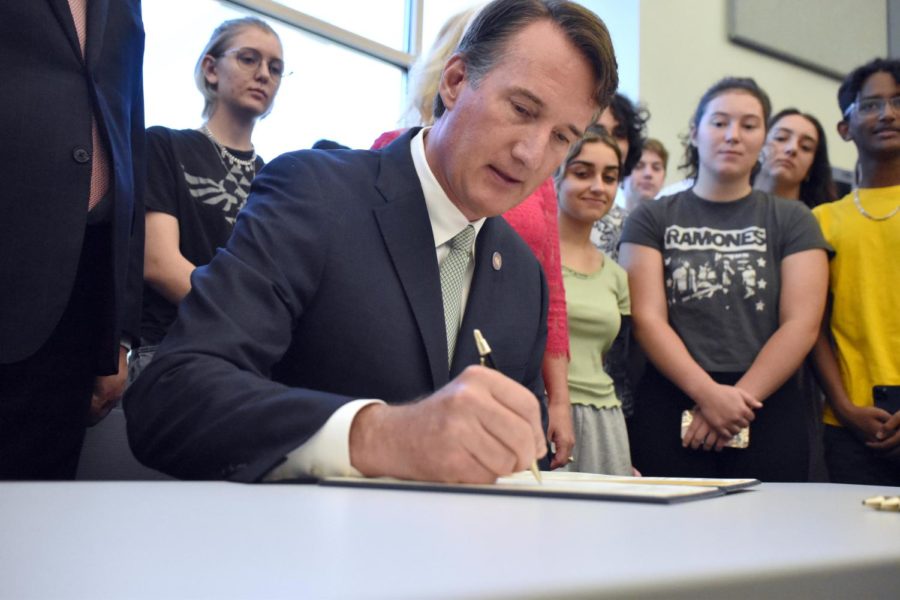 At a roundtable with parents, teachers, and government administration, Youngkin first introduced a plan for a new system to help bridge the gap. The plan contains a database for teachers to gather information about a student and upload said data to the student’s parents, specifically about areas in which the student needs additional support. This plan is still in its early stages, but aims to bridge what he sees as a gap in parent-teacher relations, and learning loss due to the COVID-19 pandemic.

Forge students Lauren Doty and Will Hagaman were at the roundtable and were asked about what helped them keep on top of their schoolwork, and about the opportunities provided to them by Forge. Parents shared their experiences having to aid their students when they were experiencing learning difficulties, specifically understanding the different technologies. The administration also talked about the need for this plan to inform parents more about their students.

“I feel like some of this directive makes it seem like parents can’t already reach out and contact the teachers or look at the data already available. There’s already communication happening between parents and teachers, if parents are really curious to know what’s going on they can just simply ask, it doesn’t have to be anything that’s mandated or from the governor or anything like that,” said a Forge teacher, who chose to remain anonymous when speaking to the press.

Youngkin then signed his third executive directive, which aims to expedite the process of hiring back retired teachers and obtaining teaching licenses for new teachers. This executive directive comes at a time when schools are understaffed in many areas, with Virginia having over 1,000 teacher positions open.

The directive also plans to target communities most affected by teacher shortages with sign-on bonuses to draw teachers towards those communities. There is also room for new teacher apprenticeship programs to try and increase the total number of teachers.

“If we flip it around, do you think it’s better to have somebody in there that’s slightly qualified or keep having substitutes in 30 or 40 different classrooms,” said Mr. Thomas Coen, a Social Studies teacher who attended the signing.

The Governor visited the school in the early morning, visiting two classes to observe the teaching process. One of these second block classes, AP US Government taught by Mr. Coen, later attended the signing of Executive Directive 3 in the library, with a photo session right after.

Many local news publications covered the event, with camera crews filling the classrooms that Governor Youngkin visited, and eventually turning the library into a bustle of camera crews, photographers, and reporters.

This story was originally published on The Talon on September 1, 2022.