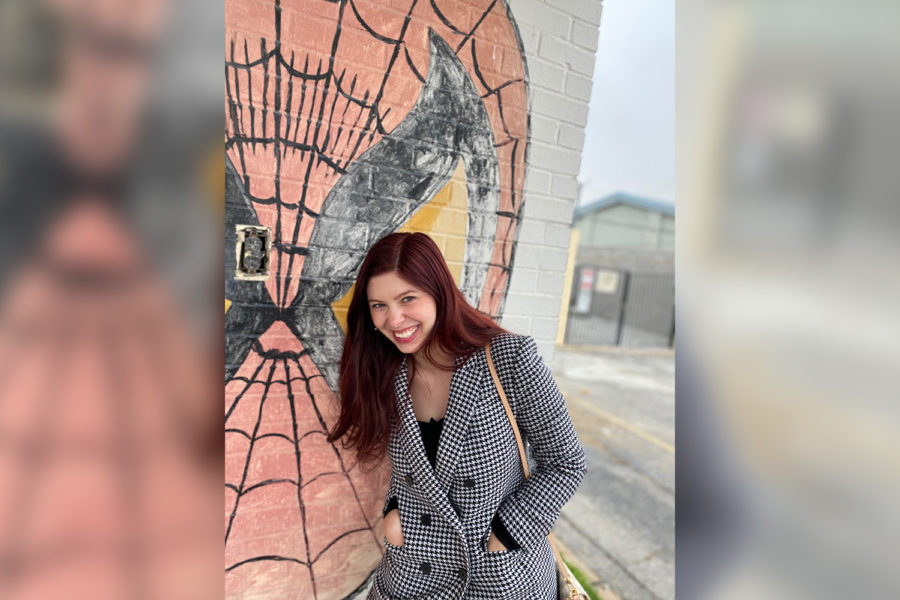 First aware of Spider-Man as a young girl, social studies teacher Haley Brown’s love of the superhero grew the older she got. “In high school she carried a Spider-Man blanket around,” dad Niel Brown said. “She believes in Spider-Man and always has him with her. Whether it’s a key ring, a sticker, her wallet, or hanging from her car, It’s a constant reminder that’s who she identifies with. She’s such a good person because she loves Spider-Man.

With Spider-Man: No Way Home opening in theaters Friday, Spider-Man is on many minds, but for teacher Haley Brown, the web-slinger has been a lifelong hero and inspiration.

“I’ve loved Spider-Man ever since I could make sense of the shapes and colors that made him a recognizable character,” Haley said. “I loved him from a very early age, probably five or six. However, my mom was very, very traditional and set in gender roles. At the time, it was only me and my younger sister, but then when I was about nine, my younger brother was born and suddenly there was an excuse in the house to have all sorts of superhero things, like bedsheets and pillows, and I started slowly stealing them from him because I figured he’s a baby, he can’t stop me.”

Her love of Spider-Man gradually grew as she became more cognizant of who her favorite was, and what he represented.

“I love his resilience. No matter what you can throw at Spider-Man, no matter how bad things get, he always picks himself back up and finds a way to persevere with a good attitude and bright look on life,” Haley said. “I also admire how important his loved ones are to him. That’s something that really speaks to me as well. His friends and family are always foremost in his mind.”

This appreciation for his resilience didn’t go unnoticed by her family. Her father, Niel Brown, understood that Spider-Man was a role model for his daughter.

“Spider-Man was always a force for good and always there to protect the little guy,” Niel said. “Haley’s always been a leader and the protector for those people. I think she got a lot of that from Spider-Man. It’s who Haley is. She’s always been very driven. She’s been very headstrong and knew that she wanted to be a go-getter. She’s got a natural drive that just kind of goes for what she wants.”

Haley’s obsession would soon become obvious to her close friends as she grew older, including her friend Michelle Leddon.

“At the end of eighth grade, I saw her Spider-Man obsession take form,” Leddon said. “She started collecting stuff when we were freshmen in high school, and by the time we were sophomores, It was more identifiable to other people. By the time she was an adult with a job and had her own money to spend things on, a lot of that money went towards Spider-Man stuff, whether it be comic books, statues, or figures.”

Many of Haley’s collectables hold deep sentimental value to her, but her comic collection is among her most beloved.

“I have a copy of Issue 33 of Spider-Man, which is one of my favorites of all time,” Haley said. “It’s actually been recreated in multiple things including the Spider-Man PS4 game and with Tom Holland. It’s the famous image of Spider-Man being beaten down in the water with a lot of rocks and things on him and he has a moment where he almost gives up because it’s too hard, but then he thinks about all the people that he loves and how much they mean to him. Then he finally finds the strength to push it off, and that is the part that really speaks to me. It’s so beautiful.”

Her connection with comic culture led her to meet like-minded people, and was responsible for her relationship with her boyfriend Jeremy Root.

“I’ve worked in comics myself for about 10 years,” Root said. “That’s how we got related. We had that in common. It’s a big part of my life. It’s a big part of her life. We moved in together, so there’s Spider-Man and stuff all over my house. She has just as many comic books as I do, so it’s just everywhere. We will go out on the weekends and go look at comics and do nerd stuff together.”

“As a woman, Mary Jane Watson has really led me to become the person I am,” Haley said. “My hair is not naturally this shade of red. She’s influenced the way I dress, the way I act, and she especially reminds me to find joy in everything because similar to Peter, she’s faced a lot of adversity, a lot of hardship, and she just continues to love life and smile every day, and I love that about her.”

Beyond the comics and merchandise, the Spider-Man films would play a key role in strengthening Haley’s love for Spider-Man.

“I love the Tobey Maguire Spider-Man movies,” Haley said. “They are my favorite. I can watch them, and have watched them thousands of times and never get bored. I don’t think that there’s a bad Spider-Man movie adaptation. I still love the Andrew Garfield ones, and I think Tom Holland is doing a really good job as well, but nothing can beat the original Tobey Maguire for me.”

With previous Spider-Man film characters returning for the latest film, Haley has high hopes for an appearance by the previous Spider-Man actors.“I’m trying not to get my hopes up, but if I see Tobey Maguire or Andrew Garfield on the big screen for even a second, even if it’s a clip of their old movies thrown in there, that will just make my life complete,” she said. “Other than that, I’m really excited to see villains from different universes. I feel like they have very different styles because the three movie groups have very different styles and I’m excited to see them interact like, How will Electro speak to Doc Ock? It’s very interesting to me. I’m beyond excited to see that.”

This story was originally published on Wingspan on December 17, 2021.