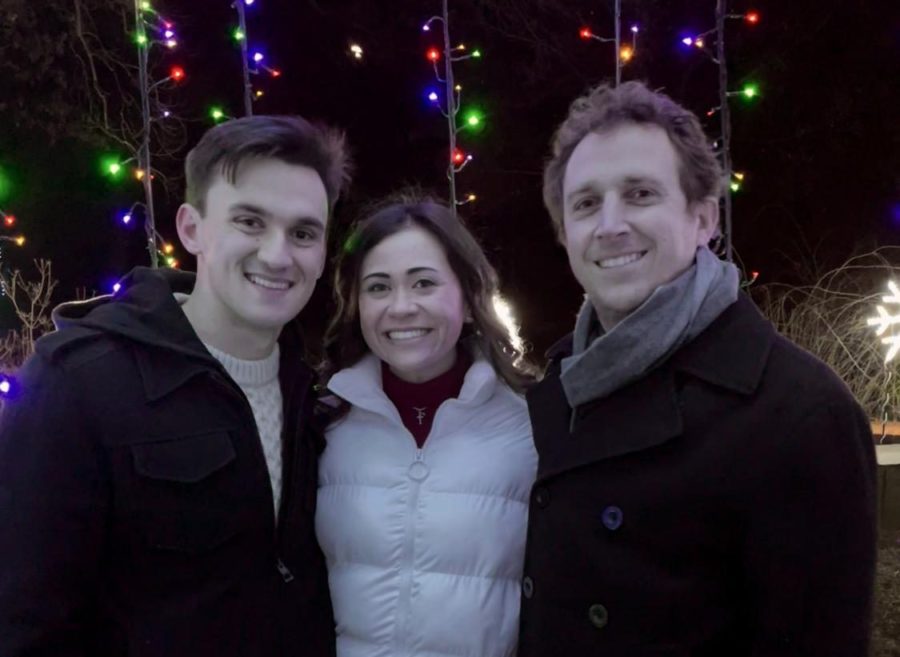 Alumni Grant Aden and Emily Dickson take a photo with their former Latin teacher Tom Herpel to commemorate their engagement. The two have dated for six years and will be living together in Omaha, Neb. as of summer 2022. “What I’m most excited about getting married is coming back to St. Louis at some point. I think as much as I [pretend] I don’t like St. Louis, we definitely want to come back to raise our family,” Dickson said. “I’m looking forward to that, and Grant wants to be a pediatrician. He’s just so good with kids. I’m excited about that chapter of our lives.”

For many students, the mention of the words “pop quiz” creates a feeling of panic. However, alumnus Grant Aden, class of 2017, and alumna Emily Dickson, class of 2018, have come to know a different meaning behind the words: a proposal.

Six years ago, as high school students, Aden and Dickson began dating following an unconventional King of Hearts proposal in the form of a pop quiz in Latin class. After partnering with Aden for multiple activities in their Latin II class, Dickson approached Latin teacher Tom Herpel with an idea. She planned to ask Aden out by giving the class a fake pop quiz.

“I remember being really excited about helping. I was honored that Emily trusted me enough to help with the quiz because it’s a personal thing,” Herpel said. “Asking someone to a dance can go pretty bad. In addition to that, you’re confiding in someone [that you] like this person.”

Questions on the fake quiz covered translations, grammar and culture from the class’s current unit. The last question on the quiz read, ‘If Grant can translate this, the pop quiz doesn’t count.’ Beneath it, written in Latin, Dickson asked Aden to be her date to the dance.

“Everybody else finished the quiz before I did. I’m a slow reader, and I wasn’t that good at Latin. By the time I looked up, everybody was staring at me,” Aden said. “It was really funny. People played it so well. I didn’t think anything suspicious was happening. I remember being so embarrassed I wasn’t even able to translate a single word so I had Herpel do it for me.”

“We called each other for at least an hour every night. My friends didn’t understand, and I got some crap from some of them. They thought it was weird that I was spending that much time calling him. But we were putting in the effort because when you don’t see someone all the time, you have to catch up on what’s going on,” Dickson said.

Although the two were apart, they prepared to take the next step in their relationship.

“I spent a lot of time thinking about how I wanted to propose because our relationship, I feel, is really special. I made her wait for so long that I wanted it to be happy and fun for both of us. There was a lot of encouragement from two parties, specifically [Dickson] and my grandma. Every time I would go see my grandma, she would say that I just needed to go ahead and propose to her,” Aden said.

Once Aden was set on proposing, he just needed to figure out how. With a plan reminiscent of the past, Aden had prepared their perfect proposal. Now, it was his turn to reach out to Herpel.

“[Being asked to help with the proposal] created a lot of feelings of happiness and [made me] feel blessed to still be a part of [Aden and Dickson’s] lives. Having them trust me with the proposal just reminded me why I’m in this profession. It’s just to forge relationships,” Herpel said. “I would [only] see them every once in a while, but knowing that they were at that stage in their life made me so happy, and also made me feel really old. I was there when it began, and now I’m here for the next step.”

Aden and Herpel worked together to create another pop quiz. However, unlike last time, it was Dickson’s turn to be tested. The quiz consisted of multiple questions reviewing the culture of ancient Romans and ended with “if Emily gets this question right, nothing else matters.” Beneath it, in Latin, Grant proposed.

“Every year in the Botanical Gardens, there’s a tunnel of lights which Grant and I have a cute picture of. We were walking through that part and it was super crowded, it was the busiest I’d ever seen the lights before. We went to the other part of the park and Grant said, ‘we’ll just wait here for a second.’ We were there for 20 minutes and I was like, ‘what is going on?’” Dickson said. “I didn’t know we were waiting for Herpel. But then, Herpel shows up and pulls out the quiz, and I knew exactly what was going on. I was so excited, I didn’t even read the quiz. One of the words in the first question was ‘amor’ and it was bolded. Herpel had bolded all of the keywords as a crutch to us. It was great.”

Looking forward, Aden and Dickson plan to live in Omaha, Neb. while Aden attends the University of Creighton School of Medicine until he completes his residency. During this time, Dickson intends to work as a bone marrow transplant oncology nurse at Nebraska Medical Center. After Aden’s residency, the couple plans to return to St. Louis where Aden plans to work as a pediatrician.

“I think it’s fantastic that Grant and Emily are getting married,” Herpel said. “When you think about high school relationships, there’s always this stereotype of, ‘it’s not gonna last.’ [People think] it’s something fun while you’re in high school, but when you get to college it’s not realistic. But I think when you find the right person, it doesn’t matter how old you are. I think that [Grant and Emily] are proof of that. I just remember they were the perfect match in high school, and I felt pretty good that their relationship—of all the high school relationships that I’ve seen—was gonna last.”

This story was originally published on Pathfinder on February 14, 2022.