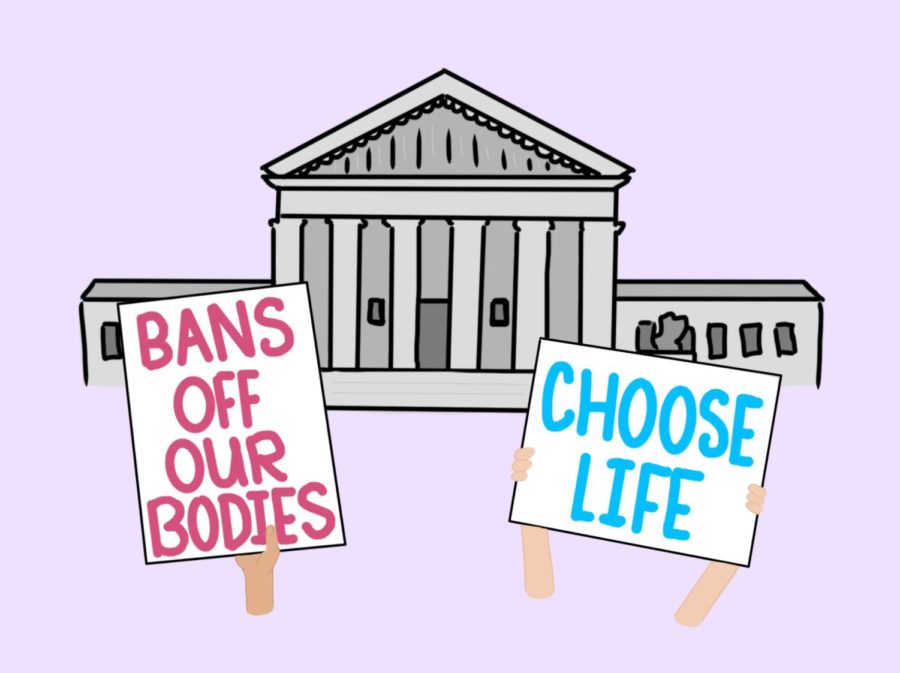 The Supreme Court draft opinion leak that revealed a plan to overturn Roe v. Wade has created conversations of differing opinions from students and teachers at La Salle.

On Monday, May 2, for the first time in American history, a full 98-page draft opinion from the Supreme Court was leaked to the public, revealing their plan to overturn Roe v. Wade and make abortion no longer a federally-protected right in the United States.

News of the plan has not only incited massive discussion and debate across the U.S. but has also prompted opinions and feelings on both sides of the conversation from members of the La Salle community as well.

The draft opinion, written by Justice Samuel Alito, disclosed the Supreme Court’s plans to overturn the 1973 decision with a 5-4 vote. If overturned, legislation surrounding abortion would be left up to the states, meaning that some states could create or continue to enforce laws that would make it very hard or impossible to receive an abortion, while others could reenact their “pre-Roe” laws that banned or restricted abortions, and some could act to protect access to abortion in their state.

After the draft opinion was released, many Democrats in Congress rapidly attempted to pass a bill codifying the Roe standard and making legal abortion a federal law, but on Wednesday, May 11, they failed to rally the 60 Senate votes that would have been necessary to pass it.

Both students and staff at La Salle shared a variety of sentiments toward the revival of the debate surrounding the nearly 50-year-old Roe v. Wade ruling.

“An unborn child is a human being and we have a responsibility to care for the most vulnerable among us, which would include women and unborn children,” religious studies teacher Mr. Edward Kendrick said.

This Catholic perspective is derived from Jeremiah 1:5, which states, “Before I formed you in the womb I knew you, and before you were born I consecrated you.” The Church holds the belief that it is a scientific fact that human life begins at conception and that it is an offense against the dignity of human life to deny any people — regardless of age, location, or ability — the right to life. Thus, many within the Church believe that the act of abortion is equivalent to the act of murder.

“The Catholic Church believes in life and dignity of the human person from conception to natural death,” religious studies teacher and Director of Service Ms. Sarah Maher said.

While the Church seeks to end abortion, it takes a much more extensive approach to the term “pro-life” than is typically seen in political spheres. It uses “pro-life” not just when discussing the topic of abortion, but to emphasize the idea that life begins at conception and ends at natural death and that human life should be protected throughout that entire period.

“I’ve always thought about abortion, from a Catholic perspective, as being a life issue, alongside the issue of preventing poverty, of preventing violence — particularly against women — preventing shame and marginalization of any segment of our society,” religious studies teacher Mr. Ryan Darmody said.

The Catholic Church has for a long time taken a strong stance on the issue of abortion rights, saying, “From the first moment of his existence, a human must be recognized as having the rights of a person — among which is the inviolable right of every innocent being to life,” according to the Vatican.

“Personally, I think it should be overturned,” sophomore Connor McQuillin said. “I was just going over human rights in one of my classes recently and one of them is the right to life, so therefore I see abortions as a violation.”

Some students noted their reactions of surprise — or lack thereof — to this potential decision. “I was very shocked,” freshman Penelope Stavig said. “It feels like, ‘Why are we coming back to this? We already made a decision about this.’” Stavig regarded the leak as seemingly “very random” and was surprised that the Court was planning to rule against maintaining federally protected abortion.

“It sadly was not super shocking,” senior Ava Whalon said. “I kind of figured it was going to happen at some point.”

Whalon linked the recently leaked draft’s plan to the increasing polarization present within the now majority-conservative Supreme Court and its justices — particularly those appointed by former President Donald Trump.

“The fact that this was even up for debate again kind of shows that we’re at a place where people know that the Supreme Court is leaning a certain way,” Whalon said. “And if you look at where the Supreme Court justices have stated their opinions before, it’s pretty clear that there is a little bias.”

Abortion rights have historically been a point of contention in U.S. politics, creating severe division between people and political parties. However, some Catholics do not believe that one political understanding completely represents the Church’s views on the topic.

“I do not believe that when you look at what the Catholic Church teaches about being pro-life, that there is a political party that is pro-life,” religious studies teacher Mr. Edward Kendrick said.

The Catholic Church states that it is committed to social justice and valuing the preservation of life in every aspect, from the death penalty, to immigration, to gun control, to abortion.

“Without universal healthcare, without a paid living wage, without access to healthcare needs, with a foster care system that is completely falling apart and has been for a long time… those things just can’t be ignored when talking about this issue,” religious studies teacher and La Salle’s Director of Service Ms. Sarah Maher said.

Some students acknowledge the multiple arguments for and against abortion. “I look at the two sides of it,” senior Vinhson Nguyen said. “I myself am very religious, so it’s an ongoing battle in my head.”

While religious studies classes focus on the moral implications of the decision, they typically avoid discussions around the legality of abortions, according to Mr. Darmody. “We do try to keep the legal issues, or the legality of it, out of [the class curriculum] because it is a moral choice,” he said.

However, the legality of abortions has been discussed in some social studies classes. “I talk to my students about how this is part of our legal process,” social studies teacher Mr. Alex Lanaghan said. “And there’s a lot of different avenues for students to be able to get involved and to be able to shift or reinforce whichever side they land on this issue.”

Some students expressed that they trust the Supreme Court justices and their ability to evaluate laws justly. “I believe that they’ll find the right choice or make the right decision based on the laws to the best of their abilities,” sophomore Jon Pinto said.

Due to the fact that this is mainly an issue surrounding women, the majority of conversations and questions surrounding the topic brought to Ms. Maher have been from women. “There was a lot of compassion in my class from all genders, but those who came in here to seek [me] out like, ‘I want to talk to someone about this,’ were mainly women,” Ms. Maher said.

The abortion-rights cause began even before the Supreme Court ruled on Roe v. Wade in 1973. “So far any discussion that I’ve had, the comments have been, ‘I can’t believe that 50 years into it we are now having this discussion again,’” Ms. Nitschke said. “So that’s kind of been their response, and it’s not really been anger, it’s been more of a response of frustration.”

Some people in the La Salle community, whether or not they support abortion, believe that the government — at either the state or federal level — having the power to ban legal abortions could put women’s health at risk. “I feel like having the system of the states deciding, we’re not getting rid of the problem, right?” senior Santiago Nolasco said.

Nolasco stated that, while he is personally opposed to abortion as a Catholic, he still sees an issue with abortions potentially being banned. “If you really want to reduce abortion — at least for people who believe in that — attack the root causes,” Nolasco said. “Banning abortions doesn’t fix the problem…I don’t think the federal government, or that state governments for that matter, should have the power, [or] that right. I think it should be the decision of the individual to take it upon themselves to decide whether or not they want to have an abortion,” he said.

Some students are concerned about how some women may seek abortions if they were no longer legally and medically provided. “It’s going to ban abortion, but it’s only going to ban safe abortions,” junior Emelia Warta said.

This concern has sparked debate about what effects an abortion ban would have on the health and well-being of mothers who do not wish to carry their pregnancy to term.

“If people try to start doing at-home abortions, that brings up the risk of all kinds of deaths and infections, and that’s harmful to the mother,” freshman Penelope Stavig said. “Some of the reasons people get abortions is because it’s not healthy for them or they’re not in the situation that they are able to have a child yet.”

However, Pinto pointed out that “it’s a draft — it could be overturned, it could actually not be,” he said.

The possible overturning has caused a lot of questions about the preservation of other previously established Supreme Court cases. “It’s a Fourteenth Amendment case, which if it is overturned, it opens the gates for so many more issues to come to light with the Fourteenth Amendment and in so many other cases and past precedents can be overturned, which I see as a huge issue,” senior Cameron Rast said.

The Fourteenth Amendment recognizes that every individual who is born in the United States is a natural citizen, and therefore, cannot be denied or deprived of equal protection of the laws. If Roe is overturned, it could mean that other cases protected under this standard could potentially be tried in the Supreme Court again. “Then the fear of what could happen to our country when it comes to gay rights, when it comes to other things, too — are other things going to be taken away from people who have fought for these rights?” Ms. Maher said.

The Supreme Court will make its official decision on whether or not to overturn Roe v. Wade in late May or June and will formally determine the future of abortion in the United States.

This story was originally published on The La Salle Falconer on May 18, 2022.